There's a buzz. Do you hear it? It's for opening act Matt Texter. Alex Bieler had the chance to talk with Texter about opening the upcoming show at the crooked i. Here's what he found out. 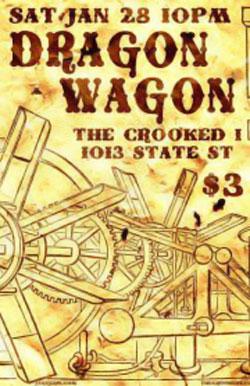 For some reason, people will close the door on an opening band without a second thought.

True, openers can be hit and miss, but too many people skip out on the chance to hear some truly talented musicians in fear of bearing the brunt of something less than stellar. Even worse, some people seem not to care.

Every so often, an opener catches enough ears to start a buzz, or, at the very least, kick start what will be a fantastic evening for both the performers and the audience. Just ask Matt Texter.

"It's always exciting going on stage," Texter said. "It's fun to go up and play the stuff you know and the stuff you wrote. Hopefully, people will end up asking 'I wonder who that was?'"

Texter opens for Dragon Wagon, a Michigan-based rootsy bluegrass band, at The crooked i Saturday, Jan. 28. At around 10 p.m., Texter will take the stage and play his heart out, hopefully attracting some new fans along the way.

Despite the opening slots, Texter has created a dedicated following of fellow musicians and fans with his homespun Americana style with shades of blues, country, and gospel. However, not everyone realizes that the act they just witnessed is a local treat.

"I've been in Erie for 10 years and people still come up to me after the show and ask me where I'm from," Texter said.

Before moving to the city, Texter hailed from Grove City, where his Pentecostal preacher father imbued a soulfulness into his music after he gave his son his very first guitar. Eventually, a combination of work and his then fiancée brought the singer-songwriter to Erie, where he's been playing ever since.

Now, this husband and father will be playing with Dragon Wagon, a similarly styled band that Texter is excited to open for.

"I called Marty [Schwab, proprietor of The crooked i] to see what shows he had going on, and as soon as I heard about Dragon Wagon, I said I wanted to open for them," Texted explained. "I really think our sounds will mesh together really well, so it should be a great show."

Indeed, a show including a folksy, soulful local singing about "Barstools and Church Pews" and the "Fire Eating Magic Man From Japan" should pair up nicely with Dragon Wagon, a band that describes itself as "bluegrass folk rock with a shot of Irish whiskey," a description that certainly points toward a lively show.

While the opening slot may not always be the most glorious role in music, Texter enjoys his chance showcase his talent to those that will listen and express his artistic side.

"I find that I'm most creative when I'm playing and it's something I think I do reasonably well," Texter said.

Now, the man that's created his following opening for other acts has his first album out, appropriately entitled "Live As Usual." It's a fitting step for a man that loves sharing his gift in front of an audience. And sometimes the best part of seeing bands like Dragon Wagon and performers like Texter is witnessing the joy they get playing on stage.

If you're a fan of that, then it's a pretty open and shut case for where you'll be that night.