Mayor Bloomberg displays his stripes: he's not a centrist. 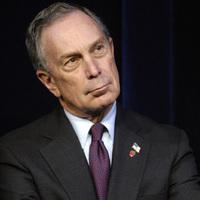 It's a favorite topic of mainstream media pundits and, frankly, a lot of frustrated voters: we need a third political party!  A great idea, right? So, why haven't any emerged, if everyone wants one?

Well, today Michael Bloomberg gives us the answer. You know, the same Mayor Bloomberg that Unity08 nearly put foward as a presidential candidate -- and Unity08 the project that wanted to put a "bipartisan" candidate in office to counter, you know, the partisan bickering in Washington DC and, you know, get things done!

Anyway, obviously frustrated by the Occupy Wall Street protest in his city, Bloomberg had this to say:

It was not the banks that created the mortgage crisis. It was, plain and simple, Congress who forced everybody to go and give mortgages to people who were on the cusp....But they were the ones who pushed Fannie and Freddie to make a bunch of loans that were imprudent, if you will. They were the ones that pushed the banks to loan to everybody.

Look familiar? It should. It's the Rush-Limbaugh-wing of the GOP's response to the mortgage crisis. Essentially, goes the argument, the blame lies with the federal goverment for lending money for housing to low-income families in inner-city areas; those people couldn't pay their mortgages and started the housing crash. (Think of it as "those-lazy-brown-people-tanked-the-economy' argument.)

Only it isn't true.

Get it? Subprime mortgages were rushed to market for profitmotives by banks that weren't required to lend money to low- or middle-income families under the Community Reinvestment Act.

These are facts so apparent, that either Bloomberg is an idiot, or he's knowingly riding on right-wing talk-show rhetoric. Lying. Either way, it's a stark reminder of the mayor's political position as a "fiscal conservative," or big-business conservative. He's a champion of Wall Street. A man who engineered big tax breaks for the city's financial industry.

He's also socially liberal. Pro-choice. Favors gay marriage. Smoked pot, and liked it. In the world of the mainstream media, that makes him a "centrist," a guy to get behind.

But that's imagining the political spectrum simplistically in terms of Red v Blue, Democrat v Republican. Unfortunately (or fortunately if you're a fan of human complexity), the array of political opinions in the country are wide and multi-faceted. Some Christian conservatives are anti-corporate environmentalists. Some union members oppose gay marriage, or even interracial marriage.

That is, you can pit the electorate against itself in many varied combinations, but one of the most potent is pro-corporate v populist. And the pro-corporate side of the equation is very small.