"Mayor of Rust" in Erie tonight

John Fetterman will be at Erie Ale Works to discuss his bid for the Democratic nomination to U.S. Senate. 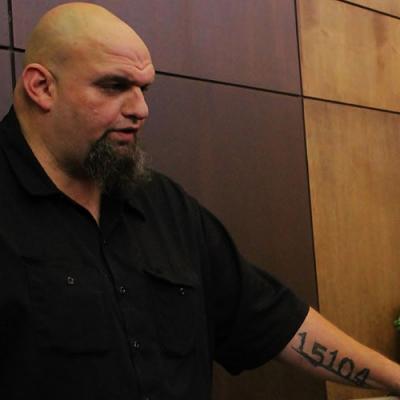 A few months after he jumped into Pennsylvania's primary race for U.S. Senate, Braddock Mayor John Fetterman is still dressing in black — and keeping his campaign and its messages blue-collar.

Traveling throughout the state since announcing his bid for the Democratic nomination to Senate in mid-September, Fetterman's made it his business to meet potential voters on their home-turfs, often appearing at neighborhood bars and other local establishments for "Meet the Mayor" events where he outlines his candidacy and its goals.

And, like his efforts in Braddock, those goals have a lot to do with repurposing, revitalizing, and reinvesting in Rust Belt  communities — the kind of work that has made tangible changes for the better in tiny Braddock, considered one of Pennsylvania's poorest (and more recently, most innovative) towns.

The site of Pittsburgh steel baron Andrew Carnegie's first mill — along with Carnegie's first library — the 20,000-plus-population borough was once a bustling, brimming-with-business, 20th century model of industry-born affluence. But between the middle and end of the last century, it became a modern model of the effects of industrial abandonment, losing 90 percent of its businesses – and 90 percent of its population.

In Braddock — and to different extents across other Rust Belt cities — what's been left in that implosion's wake is inequality, Fetterman said during a talk with the Reader in September: "Inequality in income, inequality in public safety, inequality in healthcare … even inequality in the quality of the air we all breathe."

Fetterman has laid a groundwork of change for those kinds of issues in Braddock, and, he's said, they're the kinds of issues that need be represented on Pennsylvania's behalf at the tables of national politics.

Tonight at 7 p.m., Fetterman's returning to Erie (a city which he's also no stranger to) to talk with supporters — and people curious about his bid for the Senate nomination — during a campaign stop at Erie Ale Works, 416 E. 12th St.

Fetterman's visit to Erie is being organized by Erie resident Bob Hand. "I learned about Fetterman's work to resurrect his adopted hometown of Braddock and I feel like much of Fetterman's approach could apply well to Erie and the entire state of Pennsylvania," Hand said in a recent news release.

Getting that word out — and having it heard — is important if Fetterman's to have any chance of gathering the kind of major support (and major funding) that will be needed to make a legitimate run against the other well-seasoned candidates vying for the Democratic U.S. Senate nomination (retired Navy admiral and former congressman Joe Sestak, and Katie McGinty, former chief of staff for Gov. Tom Wolf), let alone to challenge the powerful incumbent, Republican U.S. Sen. Pat Toomey.

For more information on tonight's "Meet the Mayor" event, check out the main event page here.