McQueary: I Stopped Sandusky and Contacted the Police

Mike McQueary claims he stopped Sandusky and contacted the police. What does that mean for Penn State? 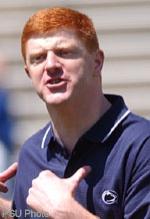 In this Penn State Sandusky scandal, the football team's assistant coach, Mike McQueary has been a target for criticism, and rightfully so. It was McQueary, after all, who caught Sandusky in the bathroom with a 10-year-old boy -- but, according to the grand jury report, McQueary apparently waited until the next morning before he did anything about it. And that action was to tell Joe Paterno.

We all knew how that went.

For not doing anything beyond telling his boss, McQueary has been villified, demonized, and just plain hated. Even our own Cory V got into it:

He saw something terrible the night before, and, rather than call the police, he called you…after first calling his father, who presumably died of shame when he discovered that the very question he was being asked over the telephone, "What should I do in this situation, Dad?"

Today, though -- and three days after Cory's drop-dead-deadline -- The Patriot-News got ahold of a McQueary email to a friend, in which he claims he both stopped the abuse and talked to the police:

"I did stop it, not physically ... but made sure it was stopped when I left that locker room ... I did have discussions with police and with the official at the university in charge of police .... no one can imagine my thoughts or wants to be in my shoes for those 30-45 seconds ... trust me.

If true, the emails imply a lot. For starters, McQueary isn't the amoral jerk most of Penn State Nation makes him out to be. For another, the suppression of the story runs deep -- into the campus police, at the very least. And now McQueary's greatest sin is that he backed down when the whole Penn State institution opposed him.

In related news, Joe Paterno has hired himself a criminal lawyer and shielded his assests from potential lawsuits -- four months ago.

UPDATE: Charles P. Pierce really lays into Penn State in a piece on Grantland. Not sure if I agree 100%, but this part about McQueary is spot on:

If Mike McQueary had seen a child being raped in a boardroom or a storeroom, he wouldn't have been any more likely to have stopped it, or to have called the cops, than he was as a graduate assistant football coach at Penn State. With unemployment edging toward double digits, and only about 10 percent of the workforce unionized, every American who works for a major company knows the penalty for exercising his personal freedom, or his personal morality, at the expense of "the company." Independent thought is discouraged. Independent action is usually crushed. Nobody wants to damage the brand. Your supervisor might find out, and his primary loyalty is to the company. Which is why he got promoted to be your supervisor in the first place.