Barlow, a three-piece band from Erie, remains humble and has fun with their style of shoegaze. 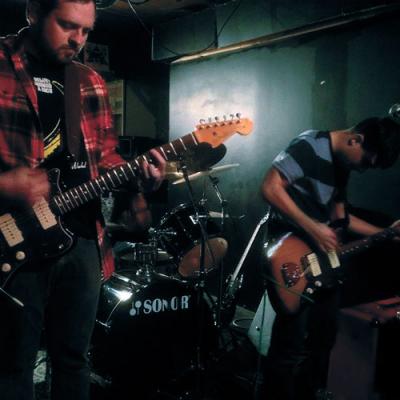 The term "shoegaze" has come to cause some confusion amongst those that throw it around all too casually. Originally coined to describe noisy bands like My Bloody Valentine and Slowdive, the term itself actually refers to the use of thick distortion by a guitarist, the distinct, fuzzy sound of true shoegaze coming from heavy effects pedals usage. Because the guitarists look at the pedals they are using so often, they seem to be gazing at their shoes.

As is the case with many genres, the traditions of shoegaze have evolved over the years; often the genre has hybridized with others. I'm sure that somewhere, someone is describing themselves as "post-gaze" by now.

But enough history, because here, in Erie, there is a group of three guys that are making music under the name Barlow that have made their own Gem City-brand of shoegaze.

Comprised of frontman Ethan Oliva, drummer Andrew Yadeski, and bassist Jake Nowocynski, the band plays what they describe as "lo-fi dream pop" (think: somewhere between Yuck's self-titled album and DIIV's Oshin). Heavily-distorted and intentionally lo-fi, Barlow's sound is one that lends itself to sleepy summer days spent staring across your lawn but also fits comfortable when having a few drinks with your friends in a low-ceilinged basement. Sure, there are some cobwebs, but they only add to the atmosphere.

And that's what is at the heart of Barlow's music: atmosphere. I had the opportunity to see them play at their cassette (yes, their music comes on cassette) release show back in January. The show took place in a friend's basement. Throughout the show, all three members of the band were active in the crowd. It didn't matter who was playing or what the music sounded like, Barlow was there in support and having fun with it.

When it was Barlow's turn to take the stage, they did so without much fanfare. They plugged in their instruments, made sure they were in tune, and went right into it. Having previously only listened to them online, I was pleasantly surprised by their live sound. Recorded, their sound is everything I've already described it as: dreamy, lo-fi, distorted. All of those hold true live, but there's an inevitable edge that gets added. To put it shortly: they got loud.

I got the impression at their release show that the boys of Barlow didn't quite understand just how good they were. I guess there's something to being humble, but these guys really don't act like they're making anything special. Which is fine; they are making good music and they're enjoying themselves as they do it.

Chris Sexauer: You guys put out a tape, Four Castles, last summer. What can you tell me about that?

Ethan Oliva: Four Castles is our second EP. We spent a couple years on it; we rewrote every song on it at least twice before we were happy with it. A lot of cheap analog and digital equipment was busted and bought in that time too. I'm really satisfied with how Four Castles turned out, and we finally put it out on tape along with our first EP, Fell Asleep.

Jake Nowocynski: Four Castles is technically the first album we've done, after our Fell Asleep EP and our Sun Split with onewayness. We took some material from the Fell Asleep era, some stuff before that, and the rest of it we wrote during that year, so it's been a long album in the process.

CS: Anything else coming out any time soon?

EO: We've been recording for a split LP with White Pony, our friend Alex's band, for a while now, and it should be up on our Bandcamp sometime soon.

CS: You've played more than a few shows with White Pony, and now you're doing a split with them. What kind of a relationship exists between the two bands?

EO: Alex is a great guy. We started hanging with him a couple of years ago, and we were going to do a band together but that never materialized since he's out in Albion. When he started doing White Pony last year, we loved it and I think it's awesome a band like that is playing shows here. He got naked one time they played.

CS: How long have you been involved in the Erie music scene?

EO: I started going to the State Street Basement Transmissions when it first opened in 2011 – that's as early as I've been involved. Andy knew Alex Harilla [Gimp Guy Promos] and he got us on what I think was the first show ever at that venue in September that year. My entire group of friends and I met at old BT either that fall or the following summer. It was a great place to be and I'm glad I met all of my friends there.

Andrew Yadeski : I was in a short-lived ska punk band in 2009-10 and attended a few shows before and around that time. Barlow's first show was the State Street Basement Transmissions' first, and since then, until recently, we've all attended shows there on a regular basis.

CS: What bands have you been listening to recently?

EO: I almost always am listening to Guided by Voices, but I also listen to Tony Malona, 12 Rods, Sonic Youth, My Bloody Valentine, Pink Floyd, and a lot of first wave powerviolence. I listen to stuff that I know I'll be inspired by later.

AY: Lately I've been listening to Guided by Voices, the Ramones, John Maus, My Bloody Valentine, and Cülo.

JN: The bands I've been listening to the most of last year and so far have probably been The Replacements, Cleaners from Venus, and Moose.

For those looking to hear Barlow's shoegaze and find out more about their upcoming shows, visit barlow.bandcamp.com and soundcloud.com/barlow-2. You won't need a cassette player to listen, but getting one to hear the true lo-fi fuzz is highly recommended.