If they earned Dan Akroyd and John Belushi's stamp of approval, they will win yours, too.

by Alex Bieler
View ProfileFacebookTwitterInstagramGoogle+RSS Feed
October 15, 2014 at 6:45 AM 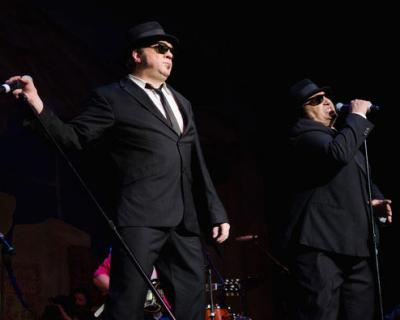 The Mercyhurst Institute for Arts & Culture has quite a few impressive names in its 2014-15 Live Performance Series, but on Wednesday, Oct. 22, they'll host a pair of men on a mission to emulate a pair of comedy gods.

The Official Blues Brothers Revue will be performing hits from the beloved band, which was originally created for Saturday Night Live by Dan Aykroyd and John Belushi. Wayne Catania and Kieron Lafferty will bring their high-energy show to the Mary D'Angelo Performing Arts Center at Mercyhurst University – presumably in between some destructive high-speed car chases – to help fans relive bluesy numbers like "Soul Man" and "Sweet Home Chicago."

Not convinced yet? How about this: The Official Blues Brothers Revue is the only act in North America to be sanctioned by "Elwood Blues" Aykroyd himself and Belushi's widow Judith. That means that Catania and Lafferty are the closest that you're going to get to seeing The Blues Brothers in person, which should warm the little Chicagoan in everyone's heart.

The Official Blues Brothers Revue is on a mission, and no number of mystery women or country bands should stop you from seeing this Aykroyd- and Belushi-approved show.