"If Cleveland is going to be the center of the political universe, then Erie will be the warmup act for the convention," C-SPAN's Steve Scully says. 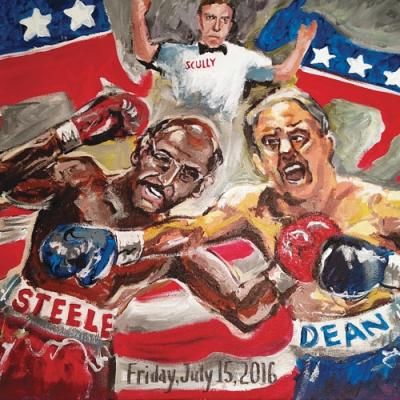 On the eve of the Republican National Convention in Cleveland, Ohio, Erie is preparing for a political showdown of its own. On Friday, July 15, former Republican Lieutenant Governor of Maryland Michael Steele and former Democratic Governor of Vermont Howard Dean will debate at Erie's Jefferson Educational Society. The event will be moderated by C-SPAN's Senior Executive Producer and the most patient man on television, Steve Scully.

"If Cleveland is going to be the center of the political universe, then Erie will be the warmup act for the convention," Scully says. "It's going to be fascinating for the Erie audience to get a sense of what the issues are and where the candidates are going. There are no two better people than the two former party chairs as political experts to frame this debate."

When we spoke last week to Steele and Dean, former chairs of the Republican and Democratic National Committees, respectively, both men stood steadfast behind their party's presumptive nominee. But with just days to go before the RNC, the Never Trump movement within the Republican establishment is once again pushing for convention rule changes that would allow for delegates to vote independent of obligatory primary bindings. It's just the latest turn in the 2016 presidential primary saga.

"It is the most unpredictable campaign we've ever seen in my lifetime," says Scully. "It's also a campaign devoid of a lot of issues. It's really based on personalities and characters. You have two presumptive nominees who have low trust levels and you still have very divided parties. Normally, after you have a nominee wrap up the nomination, you see the parties come together, and we certainly may see that, but up until this point, it's been about sharp divisions and personality clashes."

Those personality clashes are expected to be front stage on Friday when Steele and Dean, both staunch defenders of their parties, debate the finer points of the 2016 campaign. Both men see this campaign as one of great importance, not only for their parties, but for the country as well; and both men see the results of 2016 primaries and caucuses – the rise of Donald Trump and the resonance of Bernie Sanders – as a reaction by a disaffected electorate to the economic conditions that stem from decades of trade policy and globalization that's affected the American labor force.

Scully believes this conversation has particular relevance for the JES audience.

"Erie is really a microcosm of what's happening in the Republican party," he says. "You have blue collar, maybe traditional Democrats, a shrinking middle class who are frustrated because their incomes are not going up, who are worried about jobs being shipped overseas, and those are people who are not voting because of ideology. They're voting because of their pocketbooks. Trump and Sanders, on that issue, have rallied blue-collar Democrats and Republicans."

Erie's attention to significant issues through its annual programming and the JES Global Summit, which Scully chairs, as well as its historical place in American economic and political crossroads makes the city and the region attractive to national thought leaders. That's made it easier to convince people like Steele and Dean to make stops on Pennsylvania's north shore.

"I think it is significant for the JES because it puts them, once again, on the map," Scully adds.

"If you look at the long list of people that they've been able to bring in, whether it be a former first lady, political party chairs, or leading thinkers in science, technology, or government and politics, it makes the JES a player on the national stage. When people come to Erie and have a positive experience, it's easy to build upon that success and get additional speakers to come in.

In the case of Michael Steele and Howard Dean, who have both been to Erie before, it took them less than a day to commit to an event on the eve of the Republican National Convention because of their past experience with the Jefferson Educational Society."

The debate begins July 15 at 7:30 at the Jefferson Educational Society, located at 3207 State Street. Tickets are available online at jeserie.org.