Miley Cyrus // She is Coming EP 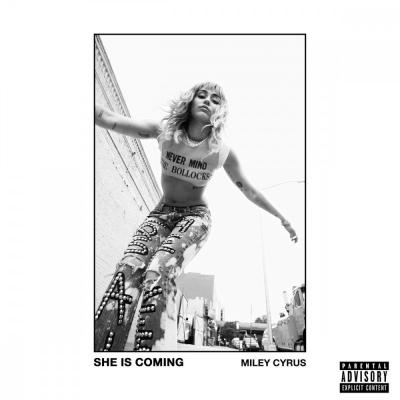 Make no mistake; She is Coming is a pivot for Miley Cyrus, and likely the first of several. In 2017, Cyrus controversially dismissed hip-hop, a genre she had been swimming in for years, and returned to her "roots" with a neo-country/pop album titled Younger Now. As one may gather, that album was not well-received (critically or otherwise), which leads us to She is Coming, the first of three EPs meant to comprise Cyrus' new studio LP, She is Miley Cyrus. It's shameless, and on the surface, She is Coming is an improvement upon its predecessor only in the sense that it suits Cyrus as an artist so much better. Cyrus' strongest asset is still her husky and unique voice, which drives tracks like "D.R.E.A.M." into irresistible territory. Lyrically, She is Coming tackles nothing that Cyrus didn't cover in her Bangerz era. This leads to some truly unfortunate moments, such as the eye-roll-inducing rapping on "Cattitude," but Cyrus does manage to hold onto some of the psychedelic influence from her Dead Petz project, lending to some fascinating production choices ("Party Up the Street"). Only time will tell whether this blend of aesthetics will be the one that sticks. — Aaron Mook