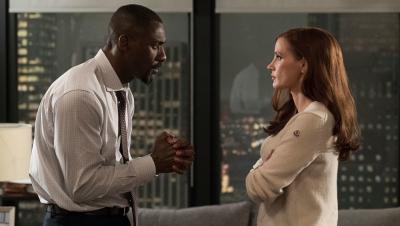 In his directorial debut, Aaron Sorkin finds himself going into the game with a metaphorical pair of pocket kings. Rivaled only by Charlie Kaufman in regard to his fame as a screenwriter, Sorkin carries with him the heavy-hitting acclaim of his resume. With films like A Few Good Men, The Social Network, and Moneyball under his belt, you barely need to mention television credits as showrunner of The Newsroom, Sports Night, and The West Wing. Not for nothing, but Sorkin fans know precisely what to expect when they see his name in the credits: fast-talking and plenty of it. His status as a celebrity writer made it easy to secure the strong cast and source material for the film — in fact, Molly Bloom, the real-life titular character actually approached Sorkin after the rights to her story were secured, since she herself was a self-proclaimed fan.

The movie begins strong, with the first few minutes tracking Bloom's early career as a competitive skier. As she takes steps to qualify for the Olympics, the intro's climax made the audience audibly gasp. In fact, taken as a standalone section, the intro might even be stronger than the rest of the film (similar to the heartbreaking unevenness of Up!), in a style reminiscent of Adam McKay's The Big Short.

But that's just the deal. The game starts as Molly Bloom — played by the wonderful Jessica Chastain — finds herself drawn into the world of high-stakes poker. Through her new boss (Jeremy Strong at his douchiest), she is introduced to different card players, most importantly, the horrendously miscast Michael Cera as "Mister X." Essentially playing himself, he's intended to be a composite of Leonardo DiCaprio, Tobey Maguire (admittedly the most Cera-like), and Ben Affleck, all of whom played in games organized by Bloom.

The film provides interesting vignettes centered around certain players, like a drunk, lovelorn Chris O'Dowd, a hilarious Brian d'Arcy James as a terrible poker player, and a chilling performance by Bill Camp as a skilled player on "tilt." Idris Elba steals his scenes as Chastain's lawyer, while Kevin Costner's distracting presence as her demanding father draws from the film. As the FBI comes into play, the fun of the poker setting falls away into low-stakes courtroom discussion, as the latter portion of film makes viewers wish they had folded early. — Nick Warren