Laugh and have a "Ball" at the Comedy Festival

by Nick Warren
View ProfileTwitterInstagramRSS Feed
July 31, 2019 at 11:00 AM 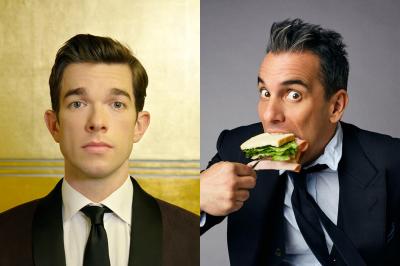 Last year, the Center's opening coincided with the long-running Lucille Ball Comedy Festival. The comedy festival began in 1991, in memory of the iconic actress and Jamestown native, who passed away in 1989. Long home to the Lucille Ball Desi Arnaz Museum, Jamestown has been keenly in tune with the comedy world, bringing in both well-known and up-and-coming acts to the festival, remarkable for a small Western New York city (in a nation where comedy almost exclusively centers around the three most populated cities in America).

The festival starts off at the Comedy Center on Wednesday, with a members-only showcase of its archives. Then, the real-life Lewis Black takes to the hologram room for a digest version of his comedy class, while Lucy's Birthday Bash will be at the Lucy Desi Museum. At the Robert H. Jackson Center, Stephen J. Morrison will moderate Kelly Carlin, Cornell Law professor Howard Leib, Esq., and Lewis Black, discussing the case of the FCC v. Pacifica Foundation, which banned George Carlin's "seven dirty words."

Thursday will begin with lunch in the Tropicana Room focusing on Ball's Jamestown history, followed by another members-only archive viewing, and a Block Party outside the Reg Lenna Center for the Arts with The Untouchables Band. Later at Reg Lenna, there will be a stand-up showcase with Matthew Broussard, Rhea Butcher, Zainab Johnson, and Lachlan Patterson. A Comedy Late Night set will take place later in the Tropicana room featuring Butcher, Johnson, and Patterson, with Kellen Erskine.

Friday morning will have a Lucy and Ethel Photo Op at Desilu Studios, with a Summer Wind Cruise on Chautauqua Lake embarking shortly after. That day's Tropicana Room Lunch will be presented by Josh Mills, son of Edie Adams and manager of the estate of Ernie Kovacs. The influential, pioneering career of Kovacs will be the focus of a new exhibit opening on Wednesday at the Comedy Center. Along with a Lucy trivia contest, a Tropicana Dinner on Ball and Jamestown, a block party will commence with Uptown Fever and Erie's own Six Year Stretch performing.

That night, John Mulaney will perform two sets across from the Comedy Center at the Northwest Arena. Mulaney is one of — if not the — finest working comedians today, with unforgettable stand-up specials like New In Town, The Comeback Kid, and Kid Gorgeous. Noted comedian Brian Regan (himself no stranger to Erie) will perform at the Chautauqua Amphitheater that evening, with late-night comedy sets from Leah Bonnema, Byron Bowers, Matthew Broussard, and Caitlin Peluffo at the Tropicana Room.

Saturday will kick off with Edie and Kit Mannerhausen at Reg Lenna. That day's Tropicana Lunch will show a never-before-seen pilot from 1955 starring The Dick Van Dyke Show's Rose Marie. The final Block Party of the weekend will see For the People and St. Vith, before that day's headlining act. Sebastian Maniscalco will return to the area for two different sets at the Northwestern Arena. Maniscalco has rapidly risen to the forefront of American comedy, recently earning Billboard's Inaugural Comedian of the Year in 2018. That evening's Comedy Late Night will feature Sherry Cola, Dina Hashem, Ali Kolbert, and Charles McBee, with another Summer Wind Cruise setting sail the following Sunday morning.

Along with those activities, there will be performances of The Lucy & Ethel Show with Diane Vincent and Rhonda Medina, tours of Jamestown and Lakeview Cemetery, and I Love Lucy-style chocolate wrapping and grape stomping events on both Friday and Saturday. — Nick Warren

For a full schedule of events and ticket information, go to comedycenter.org