Mungion and Magic Beans Gather at the Rook

The Chicago-based quartet fuses funk and jazz for a night of original music, joined by the groove-oriented Magic Beans

by Nick Warren
View ProfileTwitterInstagramRSS Feed
November 20, 2019 at 11:45 AM 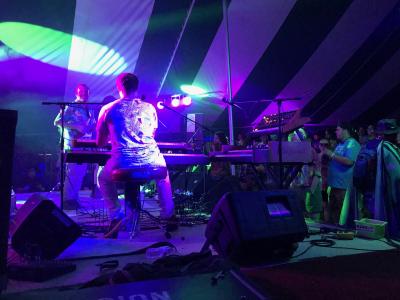 Nick Warren
Mungion, a proggy jazz funk collective from Chicago, evokes comparisons to jam giants like Phish and Umphrey's McGee. After lighting it up at this year's Gathering at Chaffee's, they'll mark their return to the 814 with a pitstop at the Rook alongside Magic Beans.

Quickly becoming one of the region's favorite jam bands, Mungion returns to the King's Rook Club. The Chicago-based quartet — pronounced "mung-yin" — have been touring relentlessly over the past few years, always making Erie a stop on their travels. Guitarist Justin Rekamp's playing is marked by crisp articulation, with Joe Re, Sean Carolan, and Matt Kellen all helping to fuse complicated jazz phrases with a progressive funk mindset. Capturing the spirit of Umphrey's McGee (and that of guitarist Jake Cinninger), and the intricate musical compositions of early Phish, it's no wonder why this band is so well-received by certain fans. This time around, the boys will be joined by another band that's becoming just as beloved by festival-goers, Magic Beans. This funky, groove-oriented four-piece from Denver, Colo. has taken off with a bang. In April, they made their Red Rocks debut, releasing their debut full-length, Off Leash in June. This July, both bands made main stage appearances at the Gathering at Chaffee's Music Festival. So whether you want to recreate that special weekend, or you're looking to see what you missed, this will be your chance, in what will be one of the biggest shows on the Rook's fall schedule. — Nick Warren