Must See Shows: This American Song at Bobby's Place

One of Erie's most beloved DIY venues will be shutting its doors, but not before hosting a few final shows. 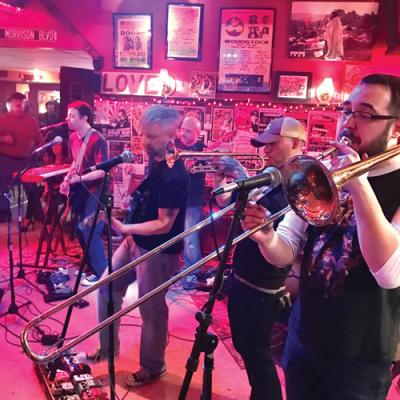 This month, one of Erie's most beloved DIY venues will be shutting its doors, but not before hosting a few final shows — the first of which they're referring to as a "multi-band bash." This Saturday, This American Song will be taking the stage at Bobby's Place, joined by other locals Mala Sangre, Maniacal Device and Planet Claire.

This American Song released a number of splits and collaborative EPs with other local artists in 2015 following the release of their debut LP, The Gray is Darker, in the summer of 2013 and a follow-up EP, Hitting the Wall, in early 2014. With Bobby's Place never settling for an uninteresting show, the genres represented during Saturday's performance run the gamut of everything from the self-described "EERIE thrash punk" of Maniacal Device to the indie garage pop of Planet Claire.

When I spoke to owner Elena Marasco, she had kind words to share about the local music scene that Bobby's Place will be departing from.

"It has been a great ride and privilege to be a part of the music scene in Erie," said Marasco. "The talent is only surpassed by the nature of the people we have met. We are happy to have provided a home for this loving and gifted family."

Marasco also wasn't shy about mentioning the importance of the artists that have helped build the community surrounding Bobby's Place — some of which will be performing this weekend.

"Erik Neilson of Detroit Red was the first to perform on the stage with his then-band, Poets and Thieves," Marasco says. "Maniacal Device performs here often. Mala Sangre has a heck of a show for the second-to-last night. Alex Harilla and JC Nickels are regulars as well; they did their last show this weekend. Storms Within's Erica Myers does monthly shows. And then there's all of the acoustic guys — Matt Texter, Josh Gone, Tony Kellogg. I'm leaving many out, I'm sure."

Whether you're a regular at Bobby's Place or you've been meaning to get around to your very first visit, you only have two weeks left to experience the electric atmosphere their venue provides to the Erie music scene. The final show at Bobby's Place will take place on Saturday, September 30th and feature seven local bands. If you're a local music fan, be sure to clear your calendar so you can make it to at least one of these final multi-band bashes. — Aaron Mook