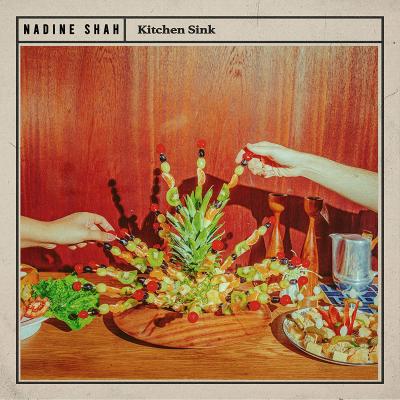 At times bombastic and brimming with an almost kitschy flair for the dramatic, Nadine Shah's Kitchen Sink is thoroughly entrancing. The follow-up to the English songwriter's 2017 album Holiday Destination (and fourth overall) hits powerfully, thanks in no small part to her longtime producing partner Ben Hillier. Having spent years working with acts like Natalie Imbruglia and Depeche Mode, Hillier also provides much of the album's rhythmic energy via drums, production, and guitar. The complex beat patterns in Kitchen Sink are often hypnotic, and when paired with Shah's floating alto vocals, the resulting combination is something between Fiona Apple, a James Bond soundtrack, and a Broadway revue. While the 34-year-old Shah grapples topics like mental health and modern aging, there's fun being had right from the opening track "Club Cougar." As soon as the horn section hits, it demands attention. Cuts like the titular track and "Walk" and "Dillydally" abound with fervent buoyancy and magnetic charm. The sultry cabaret sounds of "Ukrainian Wine" and "Wasps Nest" balance out the record for a smooth, repeatable, and dense listening experience.