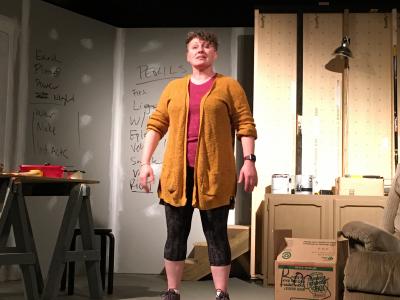 For acclaimed Lauren Gunderson, it all makes sense. Though perhaps for Angela, the woman at the center of Gunderson's Natural Shocks, the threads may be straining.

If Gunderson sounds like a familiar name to you, it's no coincidence. In 2020, Dramashop presented one of her best-known works, Silent Sky as an innovative production in the early weeks of the pandemic. Nationally, Gunderson also just so happens to be America's most popular living playwright.

Written in 2018, Natural Shocks is a one-woman show that tells the story of Angela, a woman waiting out a tornado in her basement. Dramashops's production of Natural Shocks features Nora Schillinger as Angela, the sole cast member taking the stage.

When pressed about some of the plot specifics, Schillinger was rightfully cagey, not wanting to spoil anything ahead of time for the audience. "Basically, it boils down to the fact that I play a character named Angela. Angela is alone in her basement, dealing with an encroaching tornado."

"The only other thing that I can say is the Angela is a little bit of an unreliable narrator," Schillinger explained.

Through it all, it's based on Hamlet's "to be or not to be," according to Gunderson herself.

"One of the things that I really liked about this play and about Lauren Gunderson is that she is able to sprinkle repeating lines through the show," Schillinger wagered. "They make the audience think wait, I've heard that before. Okay, that's going to be important. Of her favorite lines in the play, Schillinger hinted that "It's all statistics until it's happening to you, then it's happening 100%."

Taking on a solo performance is a daunting task for any actor, but Schillinger was up for the challenge. "You don't have any other actors to play off of you don't have anyone that can help you if you get in the weeds" she noted. This is her fourth role with Dramashop, having previously appeared in The Humans, Small Mouth Sounds, and making her debut in Mr. Burns, a Post-Electric Play. "I just can't say enough how honestly honored I am to be doing this, and that [Dramashop] had enough confidence in me to be like 'yeah, Nora can do that.'"

While Schillinger may be the only one on stage, she is certainly not the only one involved in this production. The show is directed by Zach Flock, who is also Dramashop's Artistic Director. Anna McJunkin serves as assistant director, with Zachery Hoffman as stage manager. Brittany Shaw, Marshall Mack, and Nicole Lossie also serve in technical roles, with many crew members wearing multiple hats.

While Natural Shocks will be an online-only event, once again, Dramashop has risen to the challenge of delivering a unique theatrical experience while being conscious of public safety.

"It's a three-camera setup," Schillinger broke down. "So it's almost going to be like a live television show. It's not just set up and one camera is pointed at the stage."

"I am also just excited for people to see the kinds of things that theaters can do even in the midst of something like a pandemic," Schillinger exclaimed. "You can be creative, and figure out how to do things differently."

With five performances running Fridays and Saturdays, April 16 - 24 at 8 p.m., and on Sunday April 25 at 2 p.m. // Mature themes and content // Tickets available at dramashop.org