"Never Have I Ever" Takes Teen Comedy for a Spin 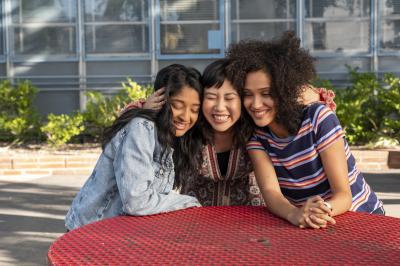 Never have I ever... seen Asian teenagers accurately portrayed on television. Okay, this isn't totally true, but it's no surprise that Asian representation in mainstream media is unnecessarily lacking. Even less represented on the screen are the faces and stories of the South Asian community. Enter Never Have I Ever, one of Netflix's latest original series straight from the brains of Mindy Kaling and Lang Fisher.

Together, Kaling and Fisher concocted a refreshingly earnest and diverse take on the classic high school coming-of-age story. Never Have I Ever follows Devi Vishwakumar (Maitryi Ramakrishnan), or "your favorite Hindu girl in the San Fernando Valley" as she puts it, as she navigates sophomore year of high school as a child of immigrants while feeling "too Indian" at times, dealing with first loves and important friendships, and all the angst, heartbreak, and joy that comes with growing up in modern America.

From episode one, the writing and dialogue are as quirky as they are funny. Though some situations read a bit unbelievable, viewers can't help but empathize with Devi because despite the quotable one-liners, Never Have I Ever is sincere in highlighting very real problems young people face. In fact, I think the most endearing quality of the show is in how complicated yet ultimately rewarding Devi's relationships are with those around her.

Throughout the season, Devi grapples with the death of her father while seeking acceptance from her strict mother (Poorna Jagannathan) by trying to meet lofty expectations set by her seemingly perfect cousin (Richa Moorjani). One of Devi's best friends (Lee Rodriguez) comes to terms with her sexuality while her other best friend (Ramona Young) comes to terms with her absent mother. To complicate things further, Devi feels compelled to compete with her nemesis (Jaren Lewison) of their class while pining over her secret crush (Darren Barnet). But hey, no one ever said high school was easy.