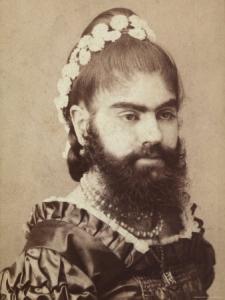 The Bearded Lady, an all-ages venue, opens in Erie

On a cold, damp Monday evening, I found myself driving down a section of East 11th Street that I rarely travelled, guiding Ol' Big Sexy, my faithful pewter-grey truck, eastbound from State Street as she gently rumbled past the various cars parked on either side.

Eventually Ol' Big Sexy and I made our way down to the last intersection before E. 11th breaks off because of the Bayfront Parkway. On the northeast corner of E. 11th and Wayne streets, I spied a red brick building with a sign reading "Broken Inn" and a big Mid-Town Tattoo-emblazoned vehicle parked right beside it. It was then that I knew I had reached my destination.

You see, the former Broken Inn has been going through some changes recently, part of a transformation that will end up with the place emerging as The Bearded Lady, a brand spankin' new all-ages venue right here in our beloved city. Slated to open at 5:30 p.m. Saturday, March 23 with xRepresentx, GhostxShip, and other hardcore acts taking the stage, The Bearded Lady was well underway in its renovation, as I discovered when I opened the black door at the entrance.

Standing by a long, light-brown bar inside the building were Don Sornberger and Johnny Matters, the tattooed twosome behind the venue. Much like Mid-Town, where Don is the owner and Johnny works as a tattoo artist, the room was decked out in black and red, sandwiched by the white of the ceiling and floor. Artwork by Johnny and fellow tattoo artists Corey Thompson and Eerie Eric adorns the walls by the stage – a spectral face here, a Yeti there – giving the place a distinct feel and identity. Much like the appearance, Don and Johnny chose the name of the venue because it, well, certainly grabs your attention.

"It was long enough to fit across the front of the building and look good," Don said, while he stood behind the bar, where they'll sell water, pop, energy drinks, and other non-alcoholic items. As music fans themselves, Don and Johnny wanted to make sure that The Bearded Lady could be a place where younger bands could play, but where younger audiences could go and have fun as well.

"There's not a lot of places besides bars for bands to play where younger kids can come and see live music," Johnny said. "Hangout, Forward Hall – those don't really exist anymore, so there isn't much for kids to do. [Going to a show] is definitely just something to do. You get to meet up with your friends – it's inexpensive, something to bring people together and keep you from walking around the streets doing nothing."

Don and Johnny pointed out that while the opening event is a hardcore show, they want to give everybody a chance to play, whether it's hip-hop, rock, or whatever else. But there is one group of people that they won't tolerate however – troublemakers.

Instead, the two are set to join in with the rest of Erie's music venues as another outlet for entertainment and Don and Johnny's work will have truly started when The Bearded Lady starts singing March 23.

Alex Bieler, who approves of both beards and ladies and the combination thereof, can be contacted at aBieler@ErieReader.com, and you can follow him on Twitter @Catch20Q.