How four Erie startups are making the right moves 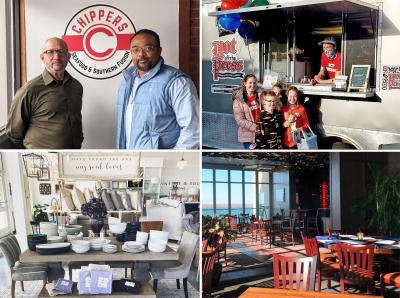 Across the country, the pandemic forced hundreds of thousands of small businesses to close. For those that were able to persevere, the last year brought unimaginable economic consequences. But even through this, some started anew. Entrepreneurs already innately embrace risk — and for many, this was just one more obstacle to overcome.

"The pandemic highlighted Erie's grit and determination to make things work," described Lesley Ridge Allen, vice president of Business Engagement for the Erie Regional Chamber and Growth Partnership. "Over the last year, many businesses in the region used the pandemic to be bold, diving into verticals, taking risks, or finally executing ideas that have been on the backburner." Ridge noted that "It's cliché, but for Erie business owners, where there is a will, they have found a way to engage existing customers, grow their business, and learn along the way."

Chippers Seafood and Southern Fusion opened August 22 — right in the middle of the pandemic. The restaurant is located in the heart of Downtown Erie at 1023 State St. and is owned by Pastor Curtis Jones Sr. and his wife Vickie. It is known for its seafood offerings alongside many Southern classics.

"The inspiration for Chippers came from a friend of mine who has owned a couple of restaurants over the years and wanted to do something in Erie," Jones tells me. "I thought it was a good idea, but it took time to materialize." The group found their location and signed the contract back in February. "March is when COVID-19 hit, but we were locked in at that time. We had originally planned to open no later than April." Although not ideal, the situation did provide some relief. "We had a lot of work to do at our location, and that gave us time to work at our own pace. No rush, no deadline, and to get it the way we wanted it to be."

Jones notes that not much will change with restrictions having loosened earlier this month. "We can only seat so many inside [capacity is 22], so we will continue to focus on the takeout. One of our goals is a takeout window — eventually opening after hours." They hope to add that sometime this summer.

They also never let anyone go. "We tried to keep everyone that started with us initially." The biggest reward for them? The community. "The response of the people coming out and supporting us. During our first few days we had people down the block, around the corner. We didn't know what to expect. We hoped things would go well — but we were overwhelmed. That was a highlight."

Hot Off the Press

The newest food truck in town gets its inspiration from beyond the city desk. Hot Off the Press creates gourmet paninis (and other offerings) that are, as the name suggests, freshly printed (created) and piping hot off the press.

"The idea came a long time ago," owner Kristian Young tells me. "I realized that I wanted to be the CEO of my own brand — the one that decided what is a good idea, how customers should be served, and employees should be treated. Working for a large corporation you really don't have the freedom to decide those things."

Young had planned on buying a truck at the beginning of 2020. "But then the shutdown happened, and I decided I was going to start from scratch and spend time researching and developing the best ways possible to do this."

The group started with some pop-ups in November to conduct research and development. "We officially launched the week of St. Patty's Day with Altered State. Since then, we've been working with distilleries, breweries, wineries, and meaderies." The group will have their own pop ups at independent locations as well. "We plan to stay relatively local and use local sustainable options as much as possible."

They even weathered the storm of being a mobile kitchen. "Sometimes you have to disagree with Mother Nature. I think a bigger upside is we have a game plan in place for the future. Even if this all happens again, we can still operate safely. We have that benefit."

Vintage and Soul Home is a furniture, home decor, and gift store located in the West Erie Plaza and the inspiration of Maria Gartrell, the store's co-owner and lead designer.

Gartrell has spent much of her career in real estate, but over the years many individuals noticed her eye for design and asked her for help with their homes. "I was doing this on the side and my sister once asked if I was doing this all for free. And at the time I was." Her sister suggested creating a website to showcase a portfolio of Maria's work.

"We then decided we were going to do a couple of pop-up shops. And it was from there we decided to do a retail space. At the time I wanted to use some types of furniture that wouldn't ship residential, so I needed to have a commercial space." And it's truly a family affair. "I'm a partner with my sister Ann who also oversees marketing — and our other sister is the manager."

The store officially opened November 28. "It was a challenge. Early on vendors wouldn't ship to states that were closed down. We found it was hard to get the items for the store. The construction was also shut down for a couple of months."

Even through this, the store has seen steady business since they opened. "We are quicker than a lot of other places — all custom furniture can come in within 10-12 weeks. We have over 400+ fabrics to choose from. We have seen also that things are starting to pick up — getting things a little bit sooner. Usually, our wait time is 90-120 days. But it's getting better."

They also source for free. "If somebody comes into the store and wants a specific piece, we will find it and give them options and they can order from us. We do a lot of custom work and home consultations because it gives us an idea of style and feel of home and we can suggest what would look best. We work with specific contractors, painters, and furniture makers as well."

For Gartrell, this was a natural extension of what she already knew. "I really felt like there was a need to have another place in Erie where you could get furniture and home décor. That's why I did it. I love real estate. It goes hand in hand. And I made a business out of it."

One of Erie's newest hot spots is located on the eighth floor of the Hampton Inn and Suites. Oliver's, aptly named in honor of Oliver Hazard Perry, is owned by Erie-based hospitality group Scott Enterprises. The rooftop bar and restaurant has yet to fully take advantage of the warm summer days and nights in Erie, but soon open-air dining will be available, offering patrons stunning views of the bay alongside a bird's eye view of U.S. Brig Niagara in her home port adjacent to the restaurant.

Jim Markham, who serves as Oliver's general manager, tells me that the hotel and restaurant were originally supposed to open in August 2020. "But at the onset of the pandemic, the group had to shift construction focus solely to the hotel as Oliver's was independent."

As such, the restaurant didn't officially open until December 3 — just a few short weeks before the governor mandated them back to takeout only. "Even in that short time, people couldn't wait to get out again. We didn't know what the response was going to be. You hope people will come, but you don't know. We also have the benefit of still being the new kid in town, but the community has been very supportive since we opened."

And the group will continue to implement all the safety precautions as the mandate is eased. "Even though we will be able to sit at the bar again for customer safety we are adding plexiglass partitions that will be movable." They also have big plans in store for the summer. "We are putting a beer garden outside on the main level. If things go right, it should seat about 200 people. We are hoping to be open by June."

Life doesn't always present us with the perfect opportunity at the perfect time. At times they come when we least expect them. Rarely are they packaged in a nice little box with a bow on top. But like each of these individuals, it is up to us to recognize opportunity when it's presented. Even when we don't think we are ready or during what seems to be the most inopportune time.

Rebecca Styn is the proprietor of Room 33 Speakeasy. She is also VP of Ventures at Erie Innovation District and recently completed her Ph.D. in Leadership and Organizational Learning from Gannon University. Follow Room 33 on Facebook @room33speakeasy, and follow Rebecca on Twitter at @rstyn.