Fake banks and barfly thanks 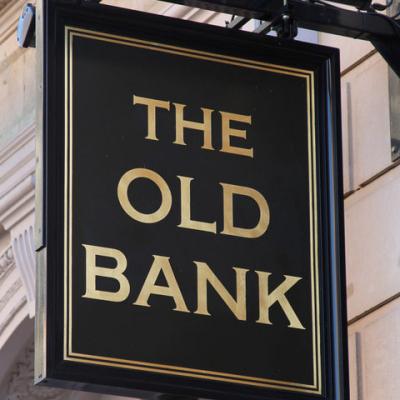 Although discouraging the marriage of children in developing nations has been U.S. foreign policy for years, a data-collecting watchdog group in America disclosed in February that 27 U.S. states have no minimum marriage ages and estimates that an average of almost 25,000 children age 15 and under are permitted to marry every year ("estimates" because some states do not keep records by age). Child marriage is often allowed in the U.S. if parents approve, although no such exemption is made in foreign policy, largely to curb developing nations' "family honor" marriages -- which often wreck girls' chances for self-actualizing. (However, "family honor" is still, in some states, the basis for allowing U.S. child marriages, such as with "shotgun" weddings.) [Unchained At Last via Washington Post, 2-10-2017]

Creative: (1) Glenn Schloeffel, vice president of the Central Bucks school board in a Philadelphia suburb, recommended that science books be viewed skeptically on "climate change" because teenage "depression" rates have been increasing. Surely, he said, one factor depressing students is reading all that alarming climate-change data. (2) Seattle's Real Estate Services rental agency has informed the family of the late Dennis Hanel that it would not return Hanel's security deposit following his January death because Hanel had not given the lease-required "notice" giving up his apartment. (He had cancer, but died of a heart attack. Washington state law requires only that the landlord provide an explanation why it is keeping the deposit.) [Philadelphia Magazine, 2-14-2017] [Crosscut Public Media (Seattle), 2-15-2017]

John Haskew, who told investigators that he was "self-taught on the banking industry," evidently thought he might succeed making bogus wire transfers to himself from a large (unidentified) national bank, in the amount of $7 billion. He pleaded guilty in February in Lakeland, Florida. (He said he thought he "deserved" the money.) (2) Katherine Kempson, 49, deciding to pay "cash" for a $1.2 million home, forged (according to York County, Pennsylvania, deputies) a "proof of funds" letter from the Members 1st credit union. Home sales are, of course, highly regulated formalities, and several attempted "closings" were halted when her money kept not showing up. One deputy told a reporter, "I'm guessing that she probably didn't think it through." [WFTV (Orlando), 2-3-2017] [York Daily Record, 2-3-2017]

The highest bail amount ever ordered in America -- $4 billion for murder suspect Antonio Willis -- was briefly in play in Killeen, Texas, in February, set by Bell County's elected Justice of the Peace Claudia Brown. Bail was reduced 10 days later to $150,000 by a district court judge, prompting Brown to acknowledge that she set the "$4 billion" to call attention to Texas' lack of bail standards, which especially punishes indigent arrestees with little hope of raising even modest amounts when accused of minor crimes. [Fox News, 2-13-2017]

Researchers including Rice University biochemist John Olson revealed in a February journal article that one reason a man avoided anemia even though he had a gene mutation that weakened his hemoglobin was because he has been a tobacco smoker -- that the carbon monoxide from smoke had been therapeutic. His daughter, with the same gene mutation, did develop anemia since she never smoked (although Olson suggested other ways besides smoking to strengthen hemoglobin, such as by massive vitamin C). [Rice University via New York Post, 2-16-2017]

Several death-penalty states continue to be frustrated by whether their lethal-injection "cocktails" make death so painful as to be unconstitutionally "cruel," and Arizona's latest "solution," announced as a Department of Corrections protocol, is for the condemned to supply their own (presumably less unpleasant) drugs. (There was immediate objection, noting that such drugs might only be available by black market -- and questioning whether the government can legally force someone to kill himself.) [The Guardian (London), 2-15-2017]

Just before Christmas, Tammy Strickland, 38, was arrested in Polk County, Florida, and charged with stealing 100 toys from a Toys for Tots collection box. (2) In February, thieves unbolted and stole a PlayStation from the children's cancer ward at Wellington Hospital in New Zealand. (3) Judith Permar, 56, who was found dead, stuck in a clothing donation drop-off box in Mount Carmel, Pennsylvania, in February (a result, police said, of trying to "steal" items), had driven to the box in her Hummer. [Bay News 9 (St. Petersburg), 12-20-2016] [New Zealand Herald, 2-10-2017] [Philly.com, 2-7-2017]

Earlier, He Would Have Been Worshipped: In February, doctors at Narayana Health City in Bangalore, India, were successful in a five-hour, 20-specialist surgery normalizing an infant born with the chromosomal abnormality "polymelia" -- which resulted in four legs and two penises. Doctors praised the parents, from rural Puladinni village, for recognizing the issue as "medical" and not as "superstition." (2) In February, police in southern Bangladesh arrested a family that used a fake penis to convince neighbors that the family had the powers of genies ("djinns"). The villagers had known the family had a girl, but overnight the genies had "changed" her into a "boy," thus frightening the villagers into making offerings to the family. [CNN, 2-10-2017] [Agence France-Presse via Philippine Daily Inquirer, 2-8-2017 ]

Willie Anthony, 20, and Jamarqua Davis, 16, were arrested in Kannapolis, North Carolina, in February after, police said, they broke into a Rent-a-Center at 2 a.m. and stole a big-screen TV. After loading the set into one car, they drove off in separate vehicles, but in their haste, smashed into each other in the parking lot. Both men subsequently drove the wrong way down South Cannon Boulevard, and both then accidentally crashed separately into other vehicles, allowing police to catch up. [WCNC-TV (Charlotte), 2-8-2017]

Nelson Foyle, 93, is believed to be Britain's longest-time patron of the same pub (the Dog and Gun in Salisbury, England), and fellow drinkers recently bought him an honorary "lordship" title to mark his 80th year on the establishment's barstools. (2) An art collective in a Los Angeles storefront re-created (for a two-week run in January) a retro video store that featured only boxed VHS editions of the movie "Jerry Maguire" -- about 14,000 copies. [NPR, 2-14-2017] [LA Weekly, 1-14-2017]