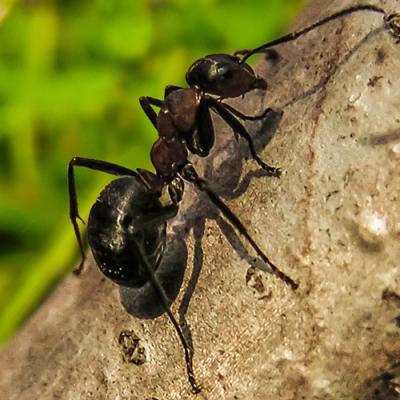 Kids as young as 6 who live on a cliff top in China's Atule'er village in Sichuan province will no longer have to use flexible vine-based ladders to climb down and up the 2,600-foot descent from their homes to school. Beijing News disclosed in October, in a report carried by CNN, that a sturdy steel ladder was being built to aid the 400 villagers after breathtaking photographs of them making the treacherous commute surfaced on the internet earlier this year [http://cnn.it/2f2PCon] [CNN, 10-26-2016].

Round Up The Usual Suspects ("Youth Pastors")

An "Ant" Version of Hell

Researchers in Poland reported in August the "survival" of a colony of ants that wandered unsuspectingly into an old nuclear weapon bunker and became trapped. When researchers first noticed in 2013, they assumed the ants would soon die, either freezing or starving to death, but, returning in 2015 and 2016, they found the population stable. Their only guess: New ants were falling into the bunker, "replacing" the dead ones. Thus, ants condemned to the bunker slowly starve, freezing, in total darkness, until newly condemned ants arrive and freeze and starve in total darkness -- and on and on. [Science Daily (8-30-2016) via WeirdUniverse.net (9-16-2016)]

Jackson County, Michigan, judge John McBain briefly gained notoriety in October when a Michigan news site released courtroom video of a December 2015 hearing in which McBain felt the need to throw off his robe, leap from the bench and tackle defendant Jacob Larson, who was resisting the one court officer on hand to restrain him. Yelling "Tase his ass right now," McBain is shown holding on until help arrived -- with Larson perhaps undermining his earlier courtroom statements claiming it was his girlfriend, and not he, who was the aggressor in alleged stalking incidents. [MLive.com, 10-13-2016]

Arrested in October and charged with kidnapping a 4-year-old girl in Lakeland: a truck driver, Mr. Wild West Hogs. Arrested in West Palm Beach in August and charged with trespassing at a Publix supermarket (and screaming at employees), Mr. Vladimir Putin. And in August, at the dedication of a new unit at Tampa General Hospital's pediatric center, longtime satisfied patients attended, including Maria Luva, who told guests her son, now 8 years old, was born there: Ywlyox Luva. [Associated Press via TampaBay.com, 10-12-2016] [WPEC-TV (West Palm Beach), 8- 30-2016] [Tampa Bay Times, 8-12-2016]

In 1921, researchers for the California Department of Fish and Wildlife stated categorically in a journal that "the one predatory animal" inspiring practically nothing "good" is the mountain lion, but recent research in the journal Conservation Letters credits the animal for saving the lives of many motorists by killing deer, thus tempering the current annual number (20,000) of driver-deer collisions. Even killing deer, mountain lions still trail pussycats as predators; researchers in Nature Communications in 2013 estimated that "free-ranging (U.S.) domestic cats" kill at least 1.4 billion birds and 6.9 billion small mammals annually. [Washington Post, 7-21-2016] [Audubon.org, 1-30-2013]

On the way to the police station in Youngstown, Ohio, on Oct. 19, after being arrested for, among other things, being a felon in possession of a gun, Raymond Brooks, 25, asked an officer (apparently in all seriousness) whether, after he got booked at the station, he could have his gun back. (The police report did not specify whether the officer said yes or no.) [The Vindicator (Youngstown), 10-20-2016]

Sovereigns! The director of the Caribbean Cultural Center at the University of the Virgin Islands, facing foreclosure of her home by Firstbank Puerto Rico, decided she was not really "Chenzira Davis-Kahina" but actually "Royal Daughter Sat Yah" of the "Natural Sovereign Indigenous Nation of ... Smai Tawi Ta-Neter-Awe," and she and her equally befuddlingly named husband have sued the bank for $190 million in federal court (and begun the flood of incomprehensible paperwork). The couple's law of "Maat" conveniently holds that attempts by federal marshals to seize their property would double the damages to $380 million. [Virgin Islands Daily News, 8-22-2016]

"Emotional Support" Animals: Daniel, age 4 -- and a duck -- accompanied a woman in her 20s in October on a flight from Charlotte, North Carolina, to Asheville, outfitted in a Captain America diaper and red shoes to protect its feet, occasionally (if inadvisedly) giving the woman a peck on the mouth. Reporting the event was author Mark Essig, who has written favorably about pigs but admitted he'd never before been on a flight with "companion poultry" and mused whether Daniel, gazing out a window, experienced an "ancestral" yearning to fly. [Citizen-Times (Asheville), 10-17-2016]

The Art of Smuggling: At press time, Leston Lawrence, 35, an employee of the Royal Canadian Mint in Ottawa, was awaiting a court decision on charges that he stole $140,000 worth of thick gold coins ("pucks") that, over time, were taken from the mint in his rectum. The mint's "highest security measures" never turned up a puck on or in Lawrence; he was arrested after the mint investigated a tip that he had sold an unusual number of them for someone of his pay grade. [Washington Post, 9-21-2016]

Tiny Thrills: (1) The town of Warley, England, announced it has applied to the Guinness people for the honor of having the world's smallest museum. The Warley Community Association's museum, with photos and mementoes of its past, is housed in an old phone booth. (So far, there are no "hours"; visitors just show up and open the door.) (2) The recent 100th anniversary of America's National Park Service drew attention to the park in Guthrie, Oklahoma -- 10 feet by 10 feet, behind the post office and dating from the original Land Office on the spot in 1889. (According to legend, the city clerk, instead of asking the government for land "100 foot square (100 feet by 100 feet)," mistakenly asked for "100 square feet.") [Conde Nast Traveler, 10-17-2016] [KFOR-TV (Oklahoma City), 4-8-2016]