Some 'multigrain' bread has a little more protein than you'd like. 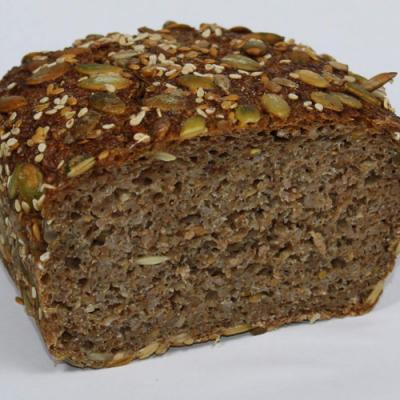 Police and prosecutors in Dallas, appropriately sensitive at having been the site of the 1963 killing of President Kennedy, have apparently taken out their shame on assassination buff Robert Groden. As the Dallas Observer reported in September, Groden has been ticketed by police dozens of times for operating book sales booths near the "grassy knoll" (site of the alleged "second shooter" of the president) and yet he prevails in court every single time (82 straight, and counting). (Tip for visitors from the Observer: Never publicly utter "grassy knoll" in Dallas, as it seems particularly to offend the police.) [Dallas Observer, 9-8-2016]

Stephen Mader, 25, native of Weirton, West Virginia, and former Weirton police officer, is fighting to get his job back after being fired for not being quick enough on the trigger. When Ronald Williams Jr., in May, made a ham-handed attempt at "suicide by cop," it was Mader who, rather than shooting, tried to talk Williams down (based on his Marine Corps and police academy training), but when Williams pointed his unloaded gun at two of Mader's colleagues, and one of them quickly shot the man to death, police officials fired Mader for having been insufficiently aggressive. [Pittsburgh Post-Gazette, 9-11-2016]

Can't Possibly Be True: Few U.S. forces in Afghanistan speak the native Pashto or Dari, and the war prospects would be dim were it not for courageous Afghan civilians who aid the U.S. as interpreters under promise of protection and future emigration to the U.S. However, the congressional battle over immigration policy has delayed entry for about 10,000 interpreters, who (along with their families) face imminent death if they remain in Afghanistan. Some in Congress also regard Afghans as riskier immigrants (despite the interpreters' demonstrated loyalty). [New York Times, 8-18-2016]

Master baker Stefan Fischer filed a lawsuit recently against Bakery of New York for wrongful firing because he refused to use "bug-infested" flour to make batches of bread. According to Fischer, when he informed management of the bugs in the facility's 3,000-pound flour silo, he was told simply to make "multigrain" bread, which Fischer took to mean that fewer diners would complain if they heard "crunching" while eating multigrain. [New York Daily News, 9-15-2016]

News Corporation Australia reported in September the enviable success of a 16-year-old British entrepreneur, Ms. Beau Jessup, who has so far earned about $84,000 with a simple online app to help rich Chinese parents select prosperous-sounding English names for their babies. Users choose among 12 personality traits they hope their baby to have, then receive three suggestions (including a list of famous people with those names). Jessup got the idea when living in China and noticing that some babies of the rich were given lame names, such as "Gandalf" and "Cinderella." [News.com.au (Sydney), 9-9-2016]

Chinese Management Techniques: (1) About 200 employees at a travel service in Shandong Province were fined the equivalent of $6.50 each recently for failing to comply with orders to "comment" (favorably, one supposes) on the general manager's daily posts to the Twitter-like Internet site Sina Weibo. (2) In June, a motivational trainer working with employees of the Changzhi Zhangze Rural Commercial Bank reportedly told the poor-performing bank personnel (among the 200 at the session) to "prepare to be beaten." He then walked among the workers, whacking some with a stick, shaving the heads of the males and cutting the hair of the females. [Beijing Youth Daily via China Daily, 8-19-2016] [Reuters via The Guardian (London), 6-21-2016]

Trees talk to each other and recognize their offspring, according to Australian ecology researcher Suzanne Simard (most recently lecturing on the influential video series TED Talks). Trees are not independent organisms but belong to arboreal "families" with characteristics identifying them to other family members. According to Dr. Simard, "mother" trees that ordinarily expand their roots wildly may hold back to give nearby "kinfolk" tree roots a chance to spread. Using "isotope tracing," she learned of trees passing healthful carbon, via fungi, to neighboring family seedlings, which she said renders the seedlings more resistant to future stress. [Treehugger, 7-29-2016] [Daily Telegraph (London), 9-11-2016]

The lifelong pickpocket known as "Auntie Sato," 83, who has spent nearly 30 years of her life behind bars, was sentenced again (two years, six months) in August for a purse-snatching from a traveler in Tokyo's Ueno Station. "Why," asked the judge, does Auntie Sato keep at it, especially since she also owns property and has rental income. Said she, "I thought about (stopping)," but "gave up." "It's hopeless." (2) Faisal Shaikh, awaiting his cellphone theft case to be called at the Thane sessions court in Mumbai, India, in August (one of several theft charges pending), wandered up to the court stenographer's desk and swiped her cellphone. He was apprehended shortly afterward near the courthouse. [Japan Today, 8-7-2016] [Mumbai Mirror, 9-1-2016]

By August, Raymond Mazzarella was fed up with the tree in his neighbor's yard in Pittston Township, Pennsylvania, as it was continuously dripping sap onto his car and so grabbed a chainsaw, cut through the 36-inch-wide trunk, and (he thought) fixed the problem. However, the tree fell directly onto Mazzarella's small apartment house, dispossessing five tenants and, ultimately, forcing inspectors to condemn the entire building. [WNEP-TV (Scranton), 8-22-2016]

Popular Fetishes: (1) A middle-aged man was reported in three incidents in the Aberdeen, Scotland, area in August and September to be approaching women and asking for piggyback rides. He was still at large. (2) In September, England's Derby Crown Court sentenced Sanjeev Sandhu, 29, to six months in jail because of the "extreme" pornography on his phone. One image was of children having sex, but the judge also noted images featuring humans having sex with dogs, a donkey, a bull and in another case, a fish. [Evening Express (Aberdeen), 9-5-2016] [Derby Telegraph, 9-3-2016]

How to Tell If You're Drunk

A water line in Hood County, Texas, broke in August, 5 feet below ground on Andrea Adams's property, but Acton Municipal District worker Jimmie Cox, 23, came to the rescue which involved Cox briefly submerging himself in the mud, face down to his waist, to clamp the line. He said later, "In this line of work, (we) do it a lot." (photo: http://bit.ly/2bPCt0s) (2) On Sept. 9, a man (who said later he somehow could not stop his car) drove off of a nine-story downtown parking garage in Austin, Texas. The SUV hung upside down (caught only by the garage guide wire that wrapped around one wheel) until passers-by pulled him to safety. (photo: http://bit.ly/2bYnTCc) [WFAA-TV (Dallas-Fort Worth), 8-25-2016] [KXAN-TV (Austin), 9-9-2011]

No Do-Overs: By 2009, James Washington believed he had gotten away with a 1995 murder, but then he had a heart attack, and on his deathbed, in a fit of remorse, told a guard in the jailhouse where he was being detained on an unrelated offense, "I have to get (this) off my conscience." However, Washington miraculously recovered from the heart attack and tried to take back his confession, but prosecutors in Nashville, Tennessee, used it to augment sparse evidence from 1995, and in October 2012 the now-healthier Washington was convicted of the murder and sentenced to 51 years in prison. [WSMV-TV (Nashville, Tenn.), 10-31-2012]