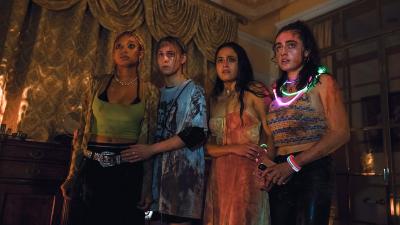 There are lots of fans of slasher movies who seem to treat the subgenre as a kind of sport, that the pleasure in viewing them comes from rooting for the killer as he makes his way through the victims who obviously deserve what they get in some capacity. This has always been strange to me as the whole point of horror is to be horrified for the characters. Yet the new film Bodies Bodies Bodies still intrigued me because it seemed to be using this concept to make some kind of statement about the more obnoxious tendencies of modern culture — a potentially interesting idea that comes off sadly far more mean-spirited than genuinely satirical in execution.

The film follows Sophie (Amandla Stenberg), a recovering addict who invites her new girlfriend Bee (Maria Bakalova) to a hurricane party being held by some friends she hasn't seen in years. As the hurricane rages outside, one friend suggests they play a murder mystery game that turns real when one friend is found dead. As the bodies slowly pile up, paranoia and mistrust rule the night, but who is the real killer?

The film wants to have some kind of message about the narcissism, ironic nihilism, and general hostility that can so often be found in the "Twitter/TikTok Generation" but I'm not quite sure what that message is beyond "laughing at the horrible people." Worse, the characters are so terrible to each other, it becomes difficult for audiences to even care about their predicament. I understand the desire to show people at their worst but that can't be all there is. All films — even horror films — need some kind of empathy and humanity to keep audiences engaged. And you'll find neither of those qualities here. — Forest Taylor