Oakman's Wake of the Flood 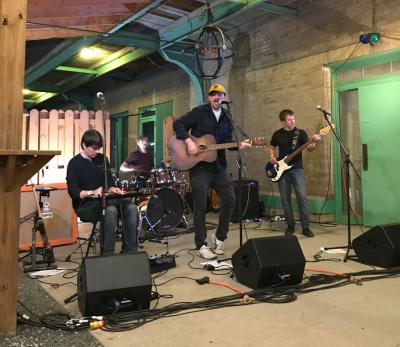 Meadville native Fred Oakman has been involved in the regionu2019s music scene for decades, playing with bands such as Twirpentines, Signal Home, and One If By Land. His current quartet, The Flood, will grace the Kingu2019s Rook Club with their full-bodied alt-country sound to kick off February.

Anyone who has been faithfully following the region's punk rock scene for some time should know about Fred Oakman. If they don't, it's damn well time you got to know him, along with his newest partners, The Flood.

Hailing from Meadville, Oakman has fronted a handful of the area's best-loved bands for decades now. Cutting their first demo tape in 1997 — when Oakman was a teenager — The Twirpentines emerged, going on to release two full-length records (2000's Leaving Never Far Behind, and 2002's Goodnight Porchlight). A thoughtful, progressive synthesis that rose above most pop-punk of the day, members of the band went on to form Signal Home, who were soon signed to the label Carbon Copy Media. That band gave way to One If By Land, a band in a similar vein of slightly angsty rock, always heavy on the nostalgia and sentiment. Following cues from his idols like Hot Water Music's Chuck Ragan and Avail's Tim Barry, Oakman has played many acoustic sets over the past few years. The singer's gravely voice and modest personality easily craft a captivating experience.

Together with The Flood, however, he's raised the bar, with gorgeously tasteful accompaniment rounding out the sound with a lush alt-country flair. Joined by his longtime musical collaborator Troy Messerall — who played in all three bands mentioned previously — on electric and lap steel guitar, there's an intoxicatingly musical shimmer added to every track. With Jake Peters on bass and Nate Kuhn on drums, the new band has already arrived at a near-perfect sound. The quartet will be filling out the night at the King's Rook Club's upstairs stage for what should be a beautiful slate of heartfelt music. — Nick Warren