Jamestown celebrates the art of humor 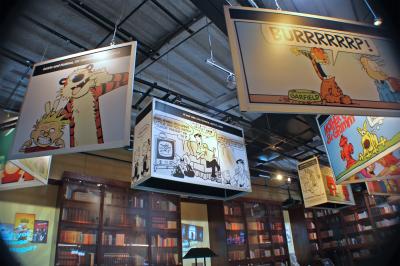 Criticism. Satire. Funny talk that has some real teeth.

Those are some of the main ingredients of the choicest kinds of comedy, and the stuff that its greatest primogenitors — unmistakable legends like Ball, Bruce, and Carlin — were made of.

Those icons and others are all long gone, but their work (and play) lives on.

And now, with the upcoming grand opening of the National Comedy Center, the honoring and celebration of that playful, brave work — and all that's come after in the generations of comedians since — is home in nearby Jamestown, N.Y.

With more than 50 immersive, interactive exhibits (designed by some of the world's leading museum-building firms), the 37,000-square-foot center "tells the story of comedy from its origins through the present, and is the first non-profit cultural institution and national-scale attraction dedicated to the art of comedy," according to officials.

"There has never been a national cultural institution that provides comedy the opportunity for appreciation often afforded other art forms," NCC Executive Director Journey Gunderson said in announcing the grand opening earlier this year.

"Culture is preserved by meaningful storytelling," she said. "What these artists have done is important, and it should be both celebrated and contextualized, drawing connections that make the past relevant to the present. Lucille Ball understood the power of comedy, and had the vision for her hometown to become a destination for its celebration in a way that would educate, foster and inspire. That's what we've set out to do here."

Coinciding with this year's Lucille Ball Comedy Festival between Aug. 1 and 5, the NCC will celebrate its grand opening with a multitude of events, including appearances by Amy Schumer, Lily Tomlin, Saturday Night Live original season alumni including Dan Aykroyd, and many others.

There's also the opening of a first-of-its-kind Lenny Bruce exhibit in the center's "Blue Room," which will include a discussion on comedy and the First Amendment and commence a fundraising partnership with the Lenny Bruce Memorial Foundation, which combats alcohol and drug addiction through scholarships and education.

The Bruce exhibit will feature highlights of Bruce's legacy as the prototypical bad-boy stand-up comedian, social critic, and satirist, highlighted by rare artifacts courtesy of his family and the Bruce Memorial Foundation. Items on display will include Bruce's iconic trench coat (which, according to legend, he began wearing on the regular owing to his being taken to jail directly from the stage, um, on the regular), his typewriter, a hand-annotated manuscript for his legendary book How to Talk Dirty and Influence People, a from-jail letter to his father, court transcripts; and more.

Bruce, who was convicted in 1964 on obscenity charges, was posthumously pardoned by New York Governor George Pataki in 2003 — a first in the history of New York State. That pardon letter will be on display, too, and a discussion ("Comedy and the First Amendment: How far is too far and who decides?") will spotlight how comedians use humor to speak truth to power, but not without the consequence of censorship, lost work, and even criminal prosecution. Panelists include the legendary comedian's daughter Kitty Bruce, First Amendment-expert Attorney Paul Cambria and outspoken, sharp-witted comedian Lewis Black.

Funding for the National Comedy Center was provided by state, federal and private philanthropic support. Through the support of the famous I LOVE NY trademark, more than $9 million has been provided by Governor Andrew Cuomo and New York State's Empire State Development and the Office of Parks, Recreation and Historic Preservation, according to officials.

The NCC is expected to attract more than 100,000 annual visitors and have a $23 million annual stabilized economic impact on the region, they said.

"We are thrilled to announce the opening of this amazing project which was conceptualized and launched more than seven years ago by a group of dedicated and hard-working individuals who have worked tirelessly to make this dream a reality," Tom Benson, NCC project chairman, said earlier this year.

"The National Comedy Center will take guests on a journey through all aspects and eras of the art form. It is the repository that has never existed that will respectfully celebrate comedy in a fun and unique way for generations to come."

Ryan Smith is not an exceptionally funny man. But he definitely enjoys a good laugh/chuckle/guffaw. He can be reached at rsmith@eriereader.com, and you can follow him on Twitter @ryanmsmithplens.