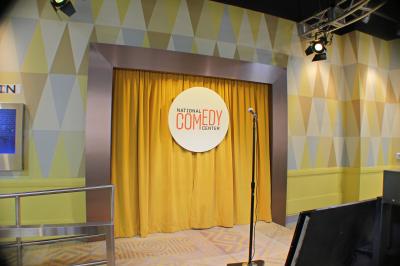 Early buzz about the Comedy Center centered around one key thing: holograms. A walkthrough of the center proves that there's much more beyond that. As guests enter, they're given what's known as a "Laugh Band." While you might expect to be given a wristband anyway at this kind of place, this black strip really comes in handy, as the first thing you do is make your way over to a kiosk and select your personal comedy profile. Ranging from the well-known to the highly underrated, you simply tap the comedians, movies, TV shows, and podcasts that you're a fan of. You then go into a miniature theater where you can check out some of these hologrammed celebrities like Jim Gaffigan performing bits and introducing you to some of the Comedy Center's special features. Next you'll see a video room, where you sit at a table and tap your band signaling the comedians you like. The unique mixture you select will give you curated clips, with plenty of new comics to explore. In some rooms, attendee tastes will be aggregately scanned and clips will be shown that cater to everyone — talk about reading a room. There are dozens of little nooks and crannies that will make the comedy geek in you ecstatic. Explore the world of late night talk shows and tape yourself "on set." You can spend a while playing the "Comedy Mogul" game, where you guess the common threads in front of and behind the camera. Put on headphones and check out a special display on Foley work (i.e., the reproduction of everyday sound effects in a studio setting), and explore how important sound is to comedy. Keep your ears peeled around a certain gray bench, because unsuspecting sitters will be privy to a carefully curated selection of fart sounds. You can learn about other types of comics, with displays about newspaper strips as well as cartoons. If you duck into the lower level of the building, you'll find the "Blue Room," a place that pulls no punches as each and every one of the "Seven Words You Can Never Say on Television" are out in the open, along with some new ones and their translations. Here you can see bits by Richard Pryor, George Carlin, and Lenny Bruce, with even dirtier bits behind the small doors along the wall ("a family walks into a talent agent's office..."). One of the most interesting features is the center's "Comedy Karaoke" where you can try your own hand at the microphone. It's not an open mic (though there will be plenty of those as well), but it's a place where you can look at famous bits, watch them with headphones for a refresher, and then perform them onstage with the help of a teleprompter with the whole act transcribed. There's also a more intimate version of this where you can go head-to-head against a friend (or a willing stranger) and try to make them break. You'll be given some of your opponent's favorite bits and you can act them out right across from them, and whoever laughs last gets the bragging rights. At the end of the line you even get to leave with your very own joke on a small slip of paper to take with you can use when the need arises. — Nick Warren