DNA tests confirm: Osama bin Laden is dead. Now where do we go from here?

by Cory Vaillancourt
View ProfileFacebookTwitterGoogle+RSS Feed
May 2, 2011 at 1:06 PM 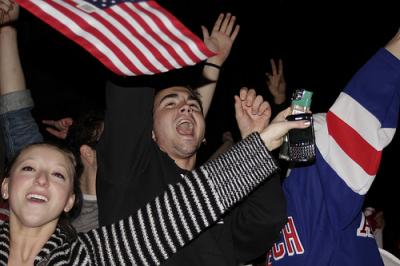 The "early to bed, late to rise" crowd among us awoke to a stunning piece of news this morning.

I'll admit, when I rolled out of bed at 10 this morning after turning in at the ungodly hour of 8:45 last night, I thought CNN's headline was a joke, the result of a vicious hack or hijacking of their homepage. The hastily worded, horribly edited content of the CNN story seemed to only affirm my initial impression, until I checked Fox, Russia Today, and Al-Jazeera, all of whom confirmed the story.

As I write this, DNA confirmation has just been announced. Osama bin Laden is dead.

I suppose my initial skepticism of this claim mirrored that of many Americans. Just one year ago, a CNN poll indicated that the overwhelming majority of Americans believed that bin Laden would never be caught and would instead die peacefully and comfortably in his old age, surrounded by family and close associates, a fate he denied almost 3,000 people some 10 years ago. After all, we're talking about the reigning world champion of hide-and-seek here. Osama bin Laden is dead, but his death may raise more questions than the answers it has seemingly provided.

What of the justice of this killing? Many of us who ordinarily could never rejoice over the killing of another human being are conflicted right now, and I have to admit I'm one of them. I've always tried (and often miserably failed) to follow the non-violence doctrines espoused by Christ, King, and Gandhi, who famously remarked that "an eye for an eye makes the whole world blind." Recall the outrage and condemnation several years back when Pat Robertson called for the assassination of Hugo Chavez? Where is that outrage now?

Now, don't get me wrong - like most Americans, I plan to celebrate the death of this evil, awful man, probably with several cocktails. It's a symbolic victory, but a victory nonetheless. We don't yet know how hands-on bin Laden has been in leading the efforts of al-Qaeda since 2001, and anyone who thinks that this single act will end the war on terror is certainly fooling themselves. But I cannot agree more with the comments of both Hillary Clinton and George W. Bush, who emphasized that evildoers cannot outrun us, and cannot outlast us.

And what of Pakistan? We've scoured the caves of Asia, the Middle East, and Africa for nearly a decade hoping to bring this man to justice, only to find him just a mile or two from a Pakistani military base, living in an urban compound under the jurisdiction of one of our oldest—and most squirrely—"partners" in the war on terror. It has been long thought that members of ISI (the Pakistani Security apparatus) had been secretly helping bin Laden evade capture, and  I'm not insinuating that the Pakistani government had knowledge of bin Laden's whereabouts, but let's just say that I'm sure they hoped he would be found anywhere but in their country. Top that off with the fact that the US did not inform the Pakistani government of the forthcoming raid, and it just looks bad for them- a 6-foot-5 Saudi wearing size 12 shoes who was on dialysis and living in a highly-secure, highly-obvious walled compound successfully escaped their notice for years. Thanks for nothing, Pakistan.

Naturally, our thoughts at this moment will turn from the policy to the policymakers. Will Obama realize a political benefit from this symbolic victory? Let's hope not. Listen, Obama didn't do this alone, and to bestow credit upon him for this singular act is misleading, at best. This action was the result of hundreds, if not thousands of people whose names will never be known; reams of intelligence gathered during George W. Bush's administration certainly played a role, and even Bill Clinton's administration has some role in this, dating back to his 1996 dialogues with Sudan on bin Laden's potential.  And it would be a grave injustice to neglect the members of our armed forces who have served, trained, and, in some cases, died so that this moment could become a reality. I think it's safe to assume that many of these folks were but teenagers when bin Laden unleashed his misguided fury on thousands of innocent Americans, never realizing how that crisp September morning would change their lives forever.

As this story plays out, we will undoubtedly see these questions debated ad nauseum, just as we'll probably see even more profound questions arise. But for now, there's one question that has been answered with a cold, hard finality: