PACA's Now And Then Pours a Drink with a Twist 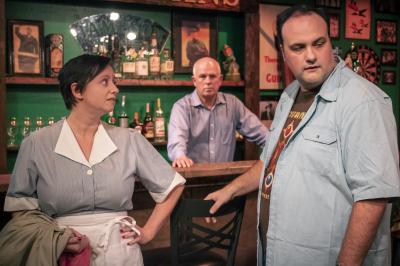 Dave Schroeder / PACA
(Left to right) Adele Crotty, Mike DeCorte, and Stephen Kovacs star in the PACA production of Now and Then. The set of Mulligans bar, constructed by J.R. Fabin, is among the most convincing you'll ever see.

Sitting in on a rehearsal for Now and Then at Erie's Performing Arts Collective Alliance (PACA), I was struck by two things. First, the set is gorgeously impressive, and secondly by the familial feeling between the cast and crew putting it all together.

The play premiered at the Peninsula Players Theatre in Wisconsin in 2018 from playwright Sean Grennan. It centers around four characters, meeting at a bar.

Taking place in 1981, we begin as Jamie (played by Stephen Kovacs) closes up the bar he works at, when an older man named Jimmy (Mike DeCorte, in his first role on stage) comes in and the two start talking. Later, we meet Abby (Adele Crotty), and a mysterious woman (Lisa Simonian), all of whom have equally substantial parts throughout each act.

"When I read it, I thought to myself, this is a little bit Twilight Zone-y to me," explained director B.J. Waide. "It's super sweet. And I don't want to give anything away, obviously, but the twist in the middle, you go from reliving old memories to What? What did he just say?"

Actor Stephen Kovacs noted that "one of the cool things about this play is how it makes you think about choices you make when you're younger, and how that affects things even as someone who is older." Getting to the core of the play's theme, Kovacs said that "it draws in everyone who has had either a wanting, a wish, or regrets and holds that to each and every one of these characters from a different perspective of where they were in their lives."

As for the bar itself, the aptly named Mulligans, it looks dead-on real. Constructed by J.R. Fabin, it is the most realistic and convincing set I've ever seen in Erie. It looks so uncanny it has to be seen to be believed, right down to the working arcade machine.

In PACA's intimate black-box setting, that's more crucial than usual. "The big thing is, you go to places like the Playhouse, who make great sets, yet a lot of them are just painted backdrops, and you're 50 feet away from the audience," Fabin said. "Whereas here you're immersed in it."  — Nick Warren