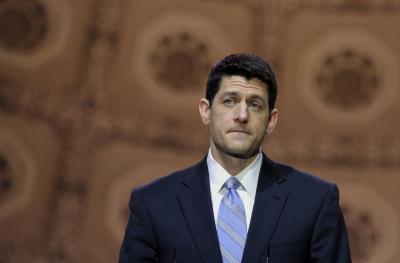 During this past Sunday's episode of Face the Nation on CBS, venerate newsman Bob Schieffer interviewed Republican Congressman Paul Ryan.

I broke out my BlaBlaMeter to evaluate the conversation.

Ryan hasn't announced yet that he's running for the Republican party presidential nomination, but as I predicted in mid-July Decision 2016 is well underway and Ryan should be considered a frontrunner.

He now has a book - just like Hillary Clinton, Elizabeth Warren, and Dr. Ben Carson - in which he lays out his vision for the future of "the party." It's Conscience of a Conservative for the 21st Century.

He's also playing the "I think Mitt should run again. The third time's a charm." card, attempting to appear magnanimous toward the party fringe that may have cost Romney/Ryan the 2012 election.

But it wasn't his "plan" or the backtracking on his role in the recent government shutdown that caught my attention. Rather, it was Ryan's insistence that "we need to win the electoral college."

In literal terms, Paul Ryan is correct. To win the presidential election, the Republican party needs to win the electoral college. His constitutional prowess precedes him.

Had it not been for the 2000 election, there would be no reason to note this otherwise inconsequential truism. However, in the context of a Republican party rebuilt on less than a plurality of the nation's voters, the statement seems somewhat more ominous.

Could it have been a Freudian slip? Did he mean to say 'we need to win the confidence of the American people' - for PR sake - but instead he let the cat out of the bag? Or is the Republican party conspiring for victory without the popular vote...again? Could the electoral bean counters configure an equation in which states that split electoral college votes become the target in 2016 to offset the big blue states that challenge Republican success?

To try and makes sense of what I suspect was a Sunday morning gaff, I dropped Ryan's 74 word statement into the BlaBlaMeter. It returned a "bullshit index" of 0.11, indicating that Ryan's remark "shows only a few indications of 'bullshit.'"