There were some big ideas being discussed on Twitter Saturday involving the growth of Rust Belt cities and how Erie shouldn't miss out: #YouHaveTheKey 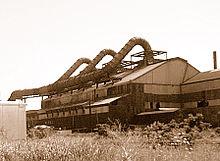 In case you missed it, there was quite the conversation happening on Twitter the morning of Saturday, Aug. 10. Maybe you were sleeping in; maybe you were doing yard work. Perhaps you were out taking a walk; perhaps you only check your glowing rectangles during standard hours of business operation.

But while you were out doing one of the aforementioned things – or something else entirely, hey we don't know everything – a #TweetTank took place after the Reader posted this story: http://artvoice.com/issues/v12n31/news_analysis.

It's titled "A Good Mystery," and it's a great read. It's also about Cleveland, which ain't too far from us. And oddly, it's published in a Buffalo paper.

How 'bout that? Two Rust Belt cities separated by a stretch of I-90 that includes Erie in the middle writing about each other. The world can be such a small place sometimes.

What can be gleaned quickly from the article is that Cleveland's faced some rough times as of late. And we're not even talking about the sports teams.

But they're no different than other Rust Belt cities, which are all struggling to reinvent themselves and find their identity in the 21st century.

But as the great Canadian philosopher Neil Young said, "It's better to burn out than to fade away, since rust never sleeps."

Or something to that effect. At least it's about rust. And working hard. I think.

Neil Young and his crazy horses aside, here's the interest thing Bruce Fisher quotes from Richey Piiparien's "Not Dead Yet: the Infill of Cleveland's Urban Core:"

"Over the last two decades, the [downtown Cleveland] neighborhood's population grew 96 percent, with residential totals increasing from 4,651 to 9,098."

So in just twenty years, Cleveland's turning a corner – in a major way.

And we know what happens when supply decreases amidst increase of demand. In this case, it seems that developers are pretty darn gleefully about the demand people now have for places to live – in downtown Cleveland.

But who are these people? What's the key to Cleveland's success and who has it?

"The key to Cleveland's micro-rebound is a spike in the number of people between 22 and 34 who are choosing to live there. Downtown Cleveland leads the inner core's 'brain gain' movement – even though that age group is declining in metro Cleveland, just as it's declining in metro Buffalo. But that's not the story in downtown, which is a net importer of young adults."

So, it turns out that young people are the key. They are choosing to live there.

And Cleveland's not alone in this brain gain thing.

As it turns out, this is happening in Buffalo, too. Remember the Zemskys? They might have something to do with it.

And this is happening in Detroit – yes, that Detroit, the one that's bankrupt. People there haven't given up and fled the city, looking for their Elysium. Instead, they're moving in to the thick of it, partaking in this "central-city rebound."

So the question becomes: How do we apply this to Erie?

The Dude jumped in, getting the conversation started, and when The Dude, well, in this case @lasedog, tweets, folks must abide.

Tweeter @JSmith___ recommended this: http://theabundantartist.com/artist-housing-projects/. It's the Abundant Artist – and there's artist housing projects, which brings artists into a community – and it works, in places like Johnstown and Oil City and Detroit and Cleveland.

Okay, so people are talking. And ideas are being shared. But is anything happening beyond this Saturday morning #TweetTank? What about all those folks still asleep, taking a walk, playing in the garden, or not staring at one of their glowing rectangles?

And equally important, where do we go from here?

Granted, Saturday morning was fun. Even David Hunter, managing partner at Epic WebStudios and poster-boy for Erie Reader's 2013 40 Under 40 class chimed in saying, "I love Saturday mornings on Twitter."

Okay, so it was fun and the conversation went on for a few hours. But then it atrophied, with a few people returning to it throughout the afternoon before all went dark Saturday evening.

But one of the afternoon contributions came from local teacher and City Council Member Bob Merksi, who added that he thought the conditions in Erie are right for change, although education and critical mass are missing links, and that work with the Erie Art Museum and ArtsErie needs to be done to create a local artist/creative district with affordable rent for artists. He also endorsed public/private partnerships on this, stating that: "local investment/buy-in is key."

If young people are the key to Cleveland's success, they can be the key to Erie's success too – that is, if there's local investment, and people buy in to the movement in the city.

So the bigger questions then are: Who's ready to invest in Erie's future, and what sort of investment will it take to yield the same results in Erie that other Rust Belt areas are experiencing?

[Editor's note: This article has been edited to accurately reflect that Neil Young is in fact Canadian, not American, as pointed out by Bill Tarbell. We regret this error, and regret that we can't claim Neil as one of our own, although we're no less accepting of him, eh.]