Phantom Thread is an understated movie, full of tiny details and swarming with tension.

by Nick Warren
View ProfileTwitterInstagramRSS Feed
January 31, 2018 at 11:30 AM 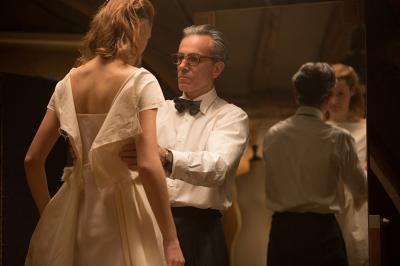 In what should automatically qualify as a winning combination, the big names behind There Will Be Blood are paired up again, as actor Daniel Day-Lewis joins director Paul Thomas Anderson. Two of the most respected names in film, both adored by critics and self-proclaimed movie buffs alike, team up for what is reportedly Lewis' cinema swan song. There's an inescapable weight when you're watching the only actor ever to win three Best Actor in a Leading Role Oscars. He's up for it again this year for  Phantom Thread — his sixth nomination overall. The film is also in the running for Best Picture, Best Director, and Best Original Score (courtesy of Radiohead guitarist and keyboardist Jonny Greenwood). The nomination that the movie deserves to win the most, however, is Best Costume Design (Mark Bridges). Wardrobe is almost literally the name of the game in this film, as it features Lewis as a well-respected clothing designer in 1950s London, Reynolds Woodcock. Despite sharing the lead character's name with a 2007 Billy Bob Thornton vehicle, the entire film is bathed in European elegance, sophistication, and subtlety, thanks to things like its long takes and gorgeous mid-century scenery. Nearly every part of this work makes it seem like it premiered with a pre-stamped Criterion Collection logo. The story starts slowly, as Lewis meets Alma, played by Vicky Krieps. She becomes his muse and eventually their relationship begins to break down. The two play against each other, settling into an almost sadomasochistic give-and-take by the end of the film. Somewhat similar to Anderson's 2012 film  The Master, it's an understated movie, full of tiny details, free of any showy flourishes, but swarming with tension. — Nick Warren