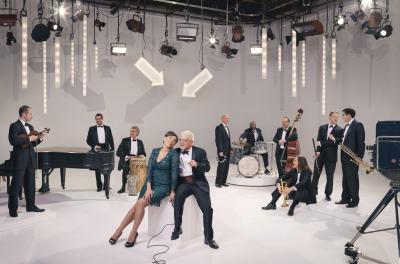 For over 25 years, Pink Martini has been shaking things up with their stirring blend of classical, traditional pop, Latin, and jazz. It's all top-shelf stuff, and after imbibing crowds have been apt to come back for more.

The internationally touring band has performed on six different continents (sorry Antarctica, we're sure you'll get your turn eventually), collaborating with some of the world's most prestigious orchestras in the process — among them the Los Angeles Philharmonic at the Hollywood Bowl, the Boston Pops, the National Symphony at the Kennedy center, the San Francisco Symphony, the Cleveland Orchestra, and the BBC Concert Orchestra at Royal Albert Hall.

Anchored by the talents of classically trained pianist Thomas Lauderdale and his longtime friend and Harvard classmate China Forbes on co-lead vocals (sharing the mic with Storm Large), Pink Martini features a rotating cast of 12 to 14 musicians and performs songs in 15 different languages, owing to the band's cosmopolitan influences. Their tunes have popped up in an equally diverse cross-section of pop culture, including TV series and commercials, film, and even video games. Lauderdale self-describes their music as "if the UN had a house band in 1962" and "an urban musical travelogue."

Joined by new vocalist additions Jimmie Herrod and Edna Vazquez, Pink Martini splashes into the Mary D'Angelo Performing Arts Center for a second time (they previously performed there in 2018) to conclude the Mercyhurst Institute for Arts and Culture's 2021-2022 season. If that show was any indication, it should coat the palate nicely going into a well-stocked 2022-2023.