by Liz Allen
View ProfileFacebookTwitterRSS Feed
January 2, 2019 at 10:30 AM 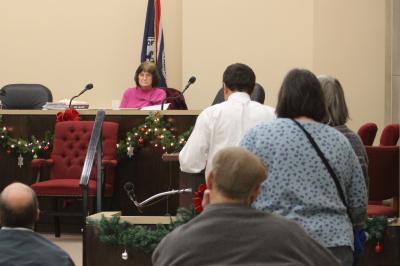 Nick Warren
Erie City Councilwoman Liz Allen has had difficulty disguising her frustrations with some of the inveterate practices of city government during her first year in office. Here, at the final City Council meeting of 2018, she objected to the unusual procedure by which outgoing councilman Bob Merski was replaced, which allowed standing members to cast all six of their available votes for Curtis Jones Jr.

Did you know?
Between 1912 and 1913, the City of Erie operated under a Select Council and a Common Council, according to information provided by the City Clerk's office.
In 1914, the city changed to a commission form of government, under which council members also served in various jobs in the administration.
On Feb. 6, 1934, the Court of Common Pleas appointed Nellie Munger to finish the term of her husband, H.L. Munger, after he died on Jan. 4. Another woman would not serve on council until Joyce Savocchio in 1982.
On Nov. 3, 1959, Erie voters adopted the Mayor-Council Plan A of the Optional Third Class City Law form of government, which provided the election of a mayor and a seven-member council. The new government went into effect on Jan. 1, 1962.
According to the clerk's records, Theodore Eichorn was the first of eight councilmen to die in office, during the 1932-33 session (the record does not list the exact date of his death). Edward J. Allen was appointed to succeed Eichorn. If I am reading my family tree correctly, Allen was my great-great uncle. — Liz Allen

Liz Allen hopes that her second year in City Council will be less stressful than her first, when she suffered a heart attack four months after taking the oath of office. She can be reached at lizerie@aol.com or lallen@erie.pa.us.

by Nick Warren5/10/2021, 4:44 PM
Attorney highlights experience on both sides of the bench in her fight for "equal and equitable access to justice"