It's time to stop taking the #IceBucketChallenge. 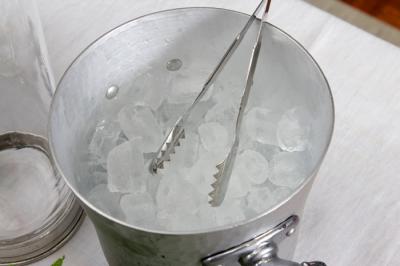 You've likely seen it by now: A video of a celebrity, a friend, a total random stranger being doused with ice-water – and generally they're laughing and others are clapping and everyone seems to be grinning ear to ear.

It's the #IceBucketChallenge, and it's the latest viral fad that the Internet seems to have occupied itself with.

The basics: Someone presents you with a choice to either donate a hundred dollars to the ALS Association, or donate a smaller sum – say, ten bucks – and get a bucket of ice dumped on you. Take the ice, and you get to issue the challenge to someone else.

Here's a problem: Not a lot of people seem to understand what's going on here.

Here's another problem: Simultaneously, we're wasting water and we're guilting people into donating because we're making this a public display both in real life and across social media platforms.

And another: People seem more often than not to be choosing the alternative to donating.

That is, people are willing to endure an ice shower instead of donating to a charity or cause, or they choose to donate significantly less to charity or causes and face the ice.

Which means that people are headed off to the store to purchase bags of ice – and presumably buckets – rather than just donating to help treat, prevent, or cure an ugly, crippling disease.

And ALS sucks and is ugly, and those living with it fight a hell of a battle. Personally, I've known people diagnosed with ALS and have watched them become encased in the glass coffins their bodies degrade into as they shut down, part by part – while their cognitive capacities remains active and alert, mind you – until they can no longer swallow and no longer breath and then depart to meet their Maker.

I'm not miffed that the ALS Association has seen a significant spike in donations because of all of this ($1.3 million this year compared to last year's $22,000 during the same timeframe). And I'm not that miffed that people are re-writing history here and creating feel-good stories about how an college baseball player suffering from ALS created the challenge (if you search hard enough, you'll find people have been issuing ice-related challenges for a while, and you'll even find a Today Show clip where a host donates to a different cause).

What I am really miffed about here are the other two things: We're senselessly wasting water while water shortages remain a global – and national – problem. And we're twisting people's arms into donating and we're making a spectacle of it.

Aside from rattling off a standard Wikipedia entry for ALS, these videos seem to include little information about the disease, about what funds raised will do, and about volunteer opportunities to help after one's been given a towel or two. Rather, these videos seem more about the entertainment – the countdown, the splash, the shivering, the shocked face, the ovations for success, and the issuing of a new challenge – the thrill of watching someone take a pail of ice to the face in the middle of summer, knowing someone else will be up up next, wondering will they do it?!.

Which all makes me really damn sad.

I know, I'm not likely making a lot of friends here. I've seen the videos of local folks I know taking and completing and issuing the challenge; truthfully, I don't know their stories of why they did it or how they helped. But really, this is something that's been eating at me and remaining silent now seems akin to me begrudging accepting the challenge myself simply because I don't want to spoil the fun for the rest of the group. But that's just not me, and if I'm spoiling the fun, so be it.

But if challenges are really fun, I'll do my part and pitch in; I'm here to issue a new challenge:

Don't do it. As in, just say no to the #IceBucketChallenge. Instead, go donate freely – keep in mind that money isn't the only option here, as your time counts, too, meaning that serving at a local soup kitchen is just as helpful – to whatever causes you believe in.

Second part of the challenge: Don't film yourself (this also means don't hire a film crew to capture you in action) donating time, money, or energy. Instead, keep the phone/tablet/camera in your pocket, unplug from the Internet, and plug into whatever it is that moves you so that you can enjoy the moment, not the latergram of the moment.

If you want to raise awareness about what causes move and stir you by telling others and encourage them to get involved, put some words to paper – or the Internet – by way of educating and informing rather than guilting.

Don't yet know what moves or stirs you and are looking for a cause? Although Erie just got done giving $2.25 million to local nonprofits for Erie Gives Day, you could easily turn one day of giving into several, many, or a whole year. Just scan the list of more than 300 nonprofits featured; trust me, something there will to hit you – which is far betting than getting hit in the face with ice.

So, who's up for this challenge?

Ben Speggen hopes you understand that he doesn't think less of you if you already participated in the #IceBucketChallenges but just hopes that you truly used that opportunity to help create awaresness about ALS. If you want to chat with him about his opinions, his new challenge, or anything else, you can reach him at bSpeggen@ErieReader.com and follow him on Twitter @ERBenSpeggen.