by Nick Warren
View ProfileTwitterInstagramRSS Feed
November 17, 2021 at 11:30 AM 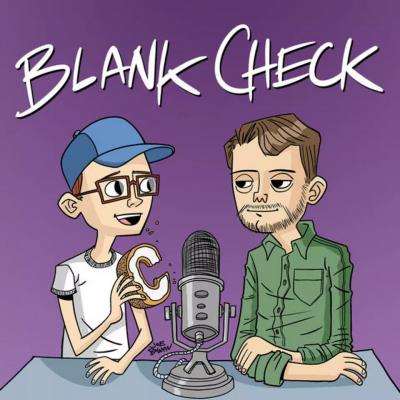 Full disclosure, Blank Check is my absolute favorite podcast. I'm not exactly sure what it is, perhaps it's the patented secret of #thetwofriends, Griffin Newman and David Sims. The two have a natural rapport that's difficult to beat. Newman is an actor (The Tick, Draft Day, Beware the Gonzo) while Sims is a longtime culture writer and film/television critic for The Atlantic.

In essence, the podcast is about "filmographies, directors who have massive success early on in their careers and are given a series of blank checks to make whatever crazy passion projects they want. Sometimes those checks clear, and sometimes they bounce, baby."

The two are joined by their faithful producer (and man of a thousand nicknames) Ben Hosley along with a different guest or guests each week, ranging from more well-known names like Jason Mantzoukas and Paul Scheer to surefire hitmakers like Emily Yoshida (the mother of Blankies), and J.D. Amato (Blank it? Thank it!).

The show actually began in 2015 as a 30-some episode series about the Star Wars prequels, and was brilliantly hilarious right from the start (#wattotho). After the George Lucas well had been mined, the duo shifted into the format it holds today, choosing a director and making their way through their films. It's not a groundbreaking format, but it's perfect. Episodes have ballooned in size to at least two hours per episode, and you'll still be left wanting more.

The pair are currently going through the filmography of John Carpenter, with the most recent episode featuring Paul Rust and Matt Gourley of With Gourley and Rust.

Podcast Picks: How Did This Get Made?