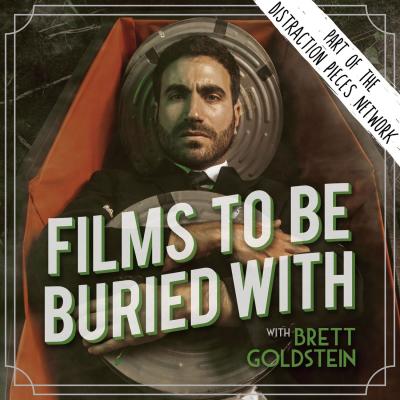 Brett Goldstein rose to fame playing a curmudgeon sporting the occasional heart of gold (as *Ted Lasso's Roy Kent). His podcast persona is all heart though, mixed with a good bit of charm and curiosity. That curiosity drives his podcast, *Films To Be Buried With, a show with a pretty clever premise: that week's guest "dies," and the rest of the episode details what movies they'd take to the afterlife (if the guest believes in that sort of thing). The structure ranges from "first film you remember seeing," to "sexiest film," to "film you love but people hate." By the end, you truly feel as if you've got some insight on what's inspired our favorite artists throughout their lives.

A true cinephile like Bill Hader (Episode 202) is perfect for the show. His story about skipping out on the SATs to go watch *Mars Attacks! is a clear highlight, while the beloved *A Christmas Story and *The Godfather (which he labels as the greatest of all time) round out his selections. Let's not spoil any more though.

Other great entries include directors Barry Jenkins (Episode 160) and Fran Kranz (197), but there are over 200 to dive into.