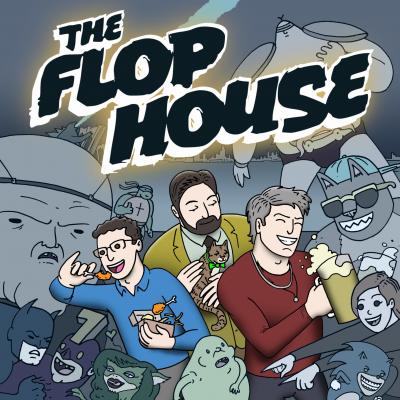 Sure, there are a lot of podcasts out there about bad movies, and a lot of them are hosted by three white guys. *But there's something magical about *The Flop House. Maybe it's the fact that they've been doing it for nearly 15 years.

Your hosts are Dan McCoy (a writer for *The Daily Show), Stuart Wellington (a comedian and NYC bar co-owner), and Elliott Kalan (also a former writer for *The Daily Show, now working on *Mystery Science Theater 3000). The interplay between the hosts bounces around like a tennis ball, sometimes unsure of where exactly it's headed but always rocketing toward whatever destination lies ahead at top speeds.

The premise of the show is simple — pick a bad movie and talk about it. Whether lasering in on a commercial or critical failure (or, as the parlance goes, a "flop"), they always approach their subject lovingly. This isn't a pile on of negativity like you might quickly find on YouTube, this is a labor of love by three men (and the occasional guest) who *genuinely love bad movies, warts and all.

Filled with countless inside jokes and running gags, from the Flophouse Housecat to a very specific scene in *Castle Freak, this is a podcast that you'll be happy to check in with.