Podcasts of the Month // Til Death Do Us Blart

by Nick Warren
View ProfileTwitterInstagramRSS Feed
November 18, 2020 at 11:15 AM 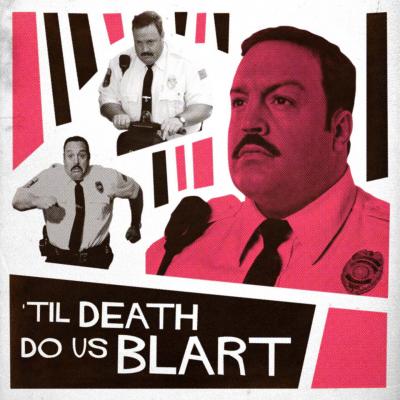 Traditions are important. Sometimes, those traditions last forever, living on long after we shuffle off this mortal coil. That's sort of how Til Death Do Us Blart works. The show is hosted by the McElroy Brothers, the prolific podcasters behind My Brother, My Brother, and Me and The Adventure Zone, who team up with New Zealand comedians Tim Batt and Guy Montgomery of The Worst Idea of All Time to watch Paul Blart Mall Cop 2. Every (American) Thanksgiving, one episode is released, forever. It has been established that each guest is to choose a successor in the event of their death, allowing the podcast to theoretically continue until the end of recorded time.

It's hilarious, whether hearing the hosts try to pronounce the movie's name, going stir crazy, or showing Stockholm syndrome in appreciation of the subpar film. In April of this year, a special episode was released, discussing the original (and in the hosts' opinion, inferior) Paul Blart Mall Cop. If you're not familiar with TWIoAT, that podcast had Batt and Montgomery repeatedly watch the same bad movie every week and talk about it. Since 2014, they've kept their feed packed, with seasons covering movies such as Grown Ups 2 and both Sex and the City movies. Like a disgusting banana, it's a Thanksgiving tradition for podcast fans to savor.