Long-running pod ventures out on its own, and still taking awkward listener calls 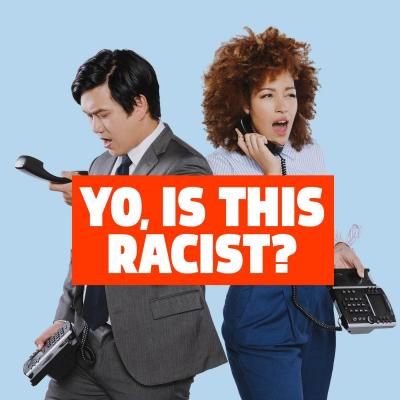 In the gift that keeps on giving — far more than anyone would prefer — this podcast seeks to tongue-in-cheekily answer the question: "Yo, Is This Racist?" Hosts Andrew Ti and Tawny Newsome navigate the extremely murky waters of racism with just the amount of biting comedy you want. A year after starting the eponymous blog in 2011, writer Andrew Ti introduced the podcast. The show takes often-awkward listener calls about racism (Ti's favorites happen to be ones where the caller is presumedly in the middle of an argument with someone else) and answers them, or at least tries to. After years of a daily format, the show switched to the more traditional weekly, longer format, and added co-host Tawny Newsome in 2018. Newsome (Space Force, Star Trek: Lower Decks, and vocalist in Jon Langford's Four Lost Souls) added an important energy to the show, enlivening it along with an overall rebranding. This December, the show amicably split from Earwolf to venture out on their own at Sub-Optimal Podcasts. There are already familiar guests aboard, including two of the show's former producers, Cody Ziglar and Matt Apodaca. While it should be obvious, it's important to know that this show doesn't take itself too seriously. The hosts are comedians at heart, though grateful to no longer feel like they're "trying to be the wokest show on a comedy network." Its real secret weapon since day one has been its emotional vent. It's a lovable way to laugh at the things that really hurt.