In public discourse people are the solution, not the problem 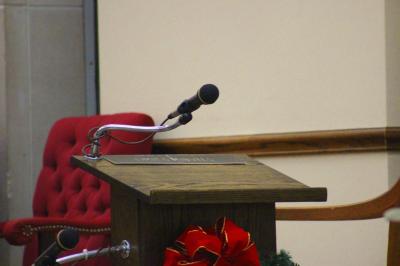 Nick Warren
The path to progress, argues author Jay Breneman, will open when policymakers begin to talk with citizens, rather than at them.

With the New Year comes new faces to , and a new season to address the issues confronting our community. We also anticipate another year of critical local elections from County Council to area school boards and the various municipal elections like borough, township, and city councils.

We may continue to see new individuals heading up local nonprofits, agencies, and various authorities, just as we're likely to see changes to program leaders and bureaucrats (non-elected public officials).

With this in mind, I believe it is time to change the way agencies and government officials engage citizens.

If you have ever been to a public meeting of any sort — whether it was held by elected officials, nonprofits, media outlets, or government agencies — I am sure you have seen folks walk up to the microphone, and with the time allotted to them, unleash their anxiety or anger about a given policy, project, or social concern.

I am also sure that you have seen elected officials, experts (real or self-appointed), or the "usual suspects" dominate public meetings with their own thoughts and conclusions.

"This is the problem as I see it, this is who is to blame, and this is what you should do about it!"

Let's face it, if you take the time out of your day to attend a public forum, it is probably because you are greatly concerned, have the time to spare, identified the problem as you see it, developed a solution that fits your experience, and may want others to hear your conclusions.

But this is not an issue of discontented citizens, it is a problem of civic design and implementation.

Decision-makers engage people in this way for a couple of different reasons: either they have no experience in authentic engagement, or they have no desire or are not empowered to create more inclusive opportunities.

Generally, this is not so much a problem for minor true/false situations that can be satisfied by simple solutions (like adding a traffic sign at an intersection), but is a significant barrier for policies and matters which inherently have no destination or stopping point, involving large numbers of people, systems, and worldviews (like violence, addiction, health care, education, the environment, or homelessness).

These matters are difficult by the nature of their complexity and differences, not necessarily because there is an inherent good vs. evil battle being waged.

What keeps such public processes — and their outcomes stuck in a perpetual and polarizing rut — is when complex matters are handled with one-off or simplistic responses, or even worse when fueled by adversarial tactics.

The methods used in approaching complex issues benefit greatly from comprehensive and inclusive activities that leverage the one resource with which decision-makers share a mutual dependence: the citizen.

No, not the public, the citizen.

The "public" is a vague concept of an aggregated while being a citizen is a role of action wielded by a known person, someone with , responsibility, skin in the game, and the potential to build and improve that which we all rely community.

To enable citizens to be citizens, policymakers must enable the building of bridges between people and the policymaking process, and these bridges are bigger than any single person or organization regardless of stature or office. You may hear it in campaign slogans, but in elected officials cannot be this bridge themselves. They can, however, determine whether a bridge is built because they can allocate resources and give up some of their own power to the process.

Out of the hundreds of public events I have personally attended (on both sides of the dais or table), I can probably count on one hand the number of times someone came up to the microphone, stated their lack of opinion on an issue, and wished the decision-makers the best of luck in addressing the matter.

Think about that for a second. How silly it may seem to a room full of people with answers for someone to step up, and to (honestly) announce that they have taken no side in a room divided.

This is what we should want to see!

Organizations and communities across the world have recognized the value of encouraging and facilitating acts of citizenship through participatory learning, deliberations, decision-making, and action-oriented evaluation, realizing that it gave them significantly better interactions and lasting results.

Be open to change and experimentation.

Use experts as a resource for citizens like a tool, not superseding or replacing the citizen's (or policymaker's) decisions.

Ask citizens how they want to be engaged.

Ask citizens directly and personally; advertisements are impersonal and only go so far.

Take your time and keep going back; community engagement is a muscle that will atrophy without exercise.

Ask your elected officials, candidates for office, and local program and community leaders how they see the role of citizen involvement. Ask them specifics on when and how they will empower citizen decision making, and hold them accountable to deliver on what they said.

Change the process, change our future.

Jay Breneman, 36, is an Army veteran, former public official, and relentless in his pursuit of community-driven public policy, serving as the Director of Community and Government Services at Strategy Solutions, Inc., and teaches a graduate policy course at Case Western Reserve University. He lives in Erie with his wife Jamie, their three children, and their dog. Connect with him at jay@getstrategy.com

by Jay Breneman10/24/2018, 9:00 AM
A personal story about the real life impact of policy points
Public discourselocal government

Ready Or Not, Here Comes Summer

You Can Do This In Erie! — Scuba Diving