The future looks bright for this revamped Millcreek icon. 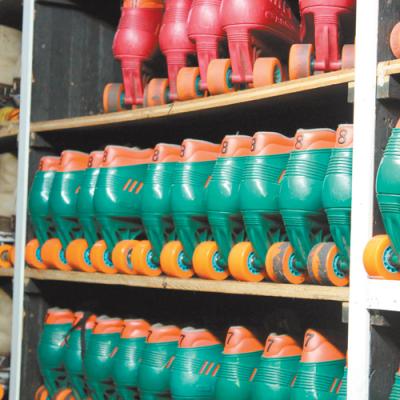 At any given weekend session, Presque Isle Skating and Event Center sees somewhere around 100 to 150 people walking through its door to go rollerskating on its floor.

That's according to rink co-owners Shannon and Steve Monney. And, whether they've come for an open-skating session, a birthday party, a family gathering, or one of the other events the rink routinely plays host to, it seems that just "about every other person who walks through the door tells us how they grew up here," Shannon said recently. "We hear things like that all the time."

Things, she said, like "This is where I had my first kiss."

"This is where I met my first girlfriend."

"It seems like it's a very iconic building," added Shannon, who, with Steve, has co-owned and operated the business since late 2011 along with partners Israel and Nagliz Rivera.

The rink – falling into disrepair before the two couples bought, restored, re-named and re-opened the facility – has been a fixture on Erie's west side since 1949, according to the Monneys; first as Westlake Skating and, more recently, as Evans Skateland West.

She's right. The rink – falling into disrepair before the two couples bought, restored, re-named and re-opened the facility – has been a fixture on Erie's west side since 1949, according to the Monneys; first as Westlake Skating and, more recently, as Evans Skateland West.

"A lot of people look at it as a nostalgic place," said Texas-native Shannon, 38. "I myself spent my childhood growing up around a skating rink."

So, she gets it, and so do her partners. And that understanding – the understanding that a skating rink, for the people who love the place, seems to be so much more than a big room with a smooth wooden floor – comes through in the fun, funky, bright-color-splashed atmosphere of the place.

I mean, I felt like a kid again the moment I first walked in. (That is, a kid – now a man in his mid-30s – who also grew up rollerskating in his own hometown.)

Good work there, everyone.

Since they've been at it, they've "really been trying to fix it up and make it better [than before]" said Shannon.

Their purchase of the skating rink on West Lake Road, however, was almost an endeavor into something else – something decidedly less fun-filled, less bright-colored, less on-wheels. At first, the Monneys said, they weren't exactly sure what they were going to do with the facility. But opening a dog kenneling business there was actually the first big idea that stuck.

It wasn't long, though, before they started hearing the calls to keep it a skating rink, to keep it open to the public, and to try to make it better than it had ended up before they came to it.

All of that encouragement "made us realize how much of a customer base is [already] here," said Shannon. "I thought it was a little crazy," she added. "But at the same time, I thought it would be good."

So, they committed to it. And knowing they'd be learning as they rolled, they immediately (as in, the same day they closed on the purchase) opened the doors to the skating public.

To make it work, the rink's owners said they quickly learned to rely on the advice and expertise of longstanding (er, long-skating) staff members like Sherry Covatto, who's worked at the rink for upwards of 20 years.

"This is my fun job," said Covatto as she readied for a recent party shift. "It's great exercise, and it's so fun to watch all the families and kids come in.

Family really is plainly evident at Presque Isle Skating. Brayden, the Monney's just-turned-two-year-old, for one, is a regular fixture at the rink – and he already loves to skate.

"He's been here since he was about three weeks old," said Shannon.

At one point when he was that wee, she said, they even had to play the rink's music playlist – what he was most accustomed to hearing – at home to soothe him to sleep.

Along with being home to various group events, as well as the regular host venue to the Eerie Roller Girls roller derby team's home bouts, the rink is continually striving to really highlight that family-friendly appeal.

Along with being home to various group events, as well as the regular host venue to the Eerie Roller Girls roller derby team's home bouts, the rink is continually striving to really highlight that family-friendly appeal, the Monneys said.

Opening the business as their own "was [recognized] as an opportunity," said Steve, "and something we saw we could make better."

That willingness to take a chance on something new and exciting, to commit to preserving (and bettering) something old and, for many, heart-held, is certainly a respectable business endeavor.