Inclusivity and acceptance to be driving forces behind regional Pride events 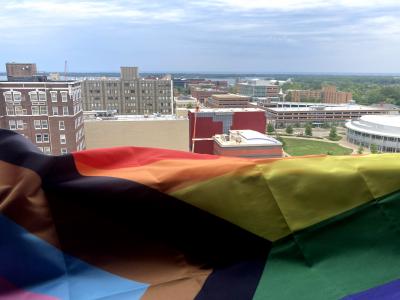 It's an uncertain time for the LGBTQIA+ community in Erie. Awareness and visibility seem stronger than ever and plenty of motivated local people are doing great work. Concurrently, reactive forces in our political system threaten to erode the progress of the past few years — especially regarding the rights of transgender and gender-expansive individuals. Visibility and acceptance are more important than ever, with many local activists and organizations re-evaluating their advocacy to be more inclusive of different identities.

When I ask Michael Mahler, the co-editor and webmaster of Erie Gay News, about recent progress for the LGBTQIA+ community, he is especially enthusiastic about the return to in-person events. "Things seem to be winding down from COVID," he says, with a sense of relief. This year's Pride March on June 25 is a good example, since it will deemphasize virtual events in favor of a full itinerary of physical performances and actions.

The number of local Pride events is expanding as well. Jamestown and Ashtabula will both host Pride celebrations on the second Saturday of June, while Warren's will occur on June 18. "There's a feeling that if you're in a smaller area, it affects more people and it is more needed," says Mahler. "I like the Prides in smaller cities because I connect with more people."

Erie Gay News, which is celebrating its 30th anniversary this year, is also expanding its outreach. "When we came back from COVID, we had maybe 15 to 20 places to drop off the newspaper," according to Mahler. "And we're now over 90."

Mahler's publication recently helped organize an LGBTQIA+ Food Drive on April 30, where 781 pounds of food and $330 in cash were collected at Central Outreach Erie. A partnership that also included the NWPA Pride Alliance, the Greater Erie Alliance for Equality, Transfamily of NWPA, and Compton's Table mobilized the drive.

Mahler is especially excited about TransFamily of Northwestern PA, which recently hosted an annual picnic on June 4 in Frontier Park, as well as its yearly Day of Visibility vigil on March 31. The organization, which serves transgender communities in Erie, Crawford, and Warren counties, is now led by Raven Cammarata, a twenty-something Mercyhurst student whose advocacy is emblematic of an emerging younger generation of activists.

When I spoke to (past 40 Under 40 honorees) DaVona Pacley and Angelica Spraggins, a queer couple who will celebrate their fourth wedding anniversary this month, about our recent progress, they quickly mentioned Central Outreach Wellness Center. "It's really making a push to support queer individuals — and Black and brown queer individuals specifically — with their health, with transitioning, with medical support," says Spraggins. "And also by bringing them to therapeutic support as well."

As a licensed professional counselor, Spraggins knows a thing or two about therapeutic support. She works for Journey to a Trauma Informed Life, an organization providing "culturally competent mental health services in our community," according to their website. One initiative of theirs that Spraggins is especially excited about is an LGBTQIA+ Queer Youth Group known as Compton's Table. Through a partnership between Journey and the Greater Erie Alliance for Equality, they were recently able to secure a physical space that will provide a "safe haven for queer youth in our region," according to a recent Facebook video from its founder, former Erie School Board member and County Executive candidate Tyler Titus.

When our conversation shifts to what's needed in Erie, Pacley and Spraggins mention the importance of intersectionality.

"As a Black, queer woman, there are three parts of myself," says Pacley. "And they all intersect as far as socioeconomic status, as far as my experience. Not everybody shares the same experience, but I can understand being in the groups that I'm a part of."

Spraggins continues this line of thinking: "I've been asked — are you Black or are you a woman first? Are you Black or are you queer first? And the truth is that I can't be separated from those things. So intersectionality is me existing in those three realms simultaneously and experiencing the world in that way."

Pacley and Spraggins note that, too often, queer-inclusive spaces in Erie are almost entirely white. "Going to Pride as Black people, we have a certain kind of culture," says Pacley. "And our music is not included, our artists are not included. There's a type of environment we want to be in. We've been in spaces where we've asked 'Can you play Drake?' and they're like 'We don't play that type of music.'"

As an example of the kind of intersectional gathering we need more of, Pacley recalls a screening of Elegance Bratton's 2019 documentary Pier Kids at the Zone nightclub last December. The film, which explores the lives of Black, queer, and transgender youths along the Christopher Street Pier in New York City, allowed Pacley and Spraggins to see something that more closely aligned with their own experiences. "That was a great conversation," says Pacley. "And out of that, a couple of people sought out therapy."

Pacley's interest in intersectional advocacy also informs her work as a doula. While providing emotional and physical support to LGBTQIA+ people throughout the birthing process, she has noticed an occasional lack of comfort with medical professionals among her clients — as well as misgendering problems when the parents are gender-non-conforming. "I started to see how the medical field will automatically assume a family is heteronormative, or that they're married, or that they're not. But they don't ask deeper questions to understand the patient," says Pacley.

As a mental health professional, Spraggins has noted that "marginalized groups have the hardest time adapting to what it takes to be in therapeutic services — and accepting who they are without feeling like they're 'other-than' or an outlier." Spraggins has found that many of her clients, especially Black and brown members of the queer community, "will flat-out call themselves 'crazy,' and they will say that they're 'weird.' They put terms on themselves that show that they've been marginalized for so long." She continues: "For the majority of these people, they're the only trans person that they've seen other than on TV. They don't have trans friends, they don't have a support group, they don't a have a space where they can have a drink and feel safe, they don't have a space where they can make art and be in contact with other queer people."

Marshall Blount (another past 40 Under 40 honoree) spends a lot of time explaining — and correcting misunderstandings about — his sexuality. As an asexual, his experiences are often marginalized (or ignored) within the larger LGBTQIA+ conversation.

Over Zoom, I asked him to summarize some of the preconceptions he deals with as an asexual (or "ace") advocate with an impressive social media presence. "Asexuality is not the same as celibacy or abstinence," says Blount. "It's about sexual orientation. A lot of people only see sexuality as heterosexuality, homosexuality, and bisexuality. But nothing else. And you see sexual orientations such as asexuality, pansexuality, etc. left out of the conversation."

As an active Youtuber with over a thousand followers, Blount uses his personal experiences to acknowledge and respond to cultural ignorance about asexuality. He summarized some of the stereotypes during our conversation: "An asexual might be considered as someone who can't get dates, who can't have relationships, or who just wants to be alone on purpose. When really it has nothing to do with relationships or sex — it's about sexual attraction. There's a big difference between sexual attraction and sex. There are even asexual people who are married and have kids."

When asked about local advocates he looks up to, Blount quickly mentions Tyler Titus, whose political achievements as a transmasculine advocate have garnered national attention. He also cites his mother who, while not a member of the LGBTQIA+ community, has been open and supportive. But Blount truly found his community on Twitter and Facebook, where he was able to engage with the broader "ace" community quite intimately, while amassing nearly 7,000 Twitter followers in the process. Influencers like Yasmin Benoit, Ciora Thomas, and The Asexual Goddess have helped him to feel confident about his identity.

Since he has been one of our community's most prominent LGBTQIA+ activists for over 30 years, I asked Michael Mahler about the changing nature of his activism. He told me that "you have to show up for people when you don't have a clear reward for doing it." As a white, cisgender gay man, he has learned to avoid what he calls a "punch card" approach to advocacy — where you need a bunch of different types present at your event or in your organization, but you don't actually change the itinerary in a meaningful way.

Showing up is also essential to Pacley: "We pride ourselves on showing up in literally all spaces. If people see us and we're visible, it can give hope to others."

As we celebrate Pride this month, consider showing up in some way yourself. Maybe it's by marching, maybe it's through a donation, maybe it's by simply listening. We're living at a time where it has become easier than ever to hear from a diverse array of voices. It's up to us to actually absorb those voices — and to respond to them with compassion and intelligence.

Dan Schank can be reached a dschank@eriereader.com