What do the May primary victories tell us about Erie politics today? 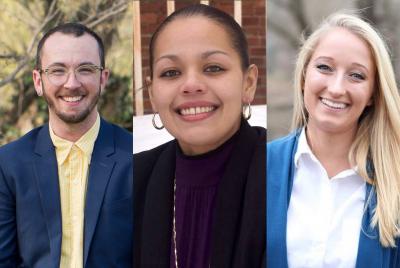 Contributed Photos
Progressive candidates fared well in May's primary election, with a number of young, diverse candidates who will be representing the Democratic party in the November general election. From left to right are Tyler Titus (nominee for Erie County Executive), Jasmine Flores (Erie City Council), and Lydia Laythe (Erie County Council). If Titus wins, they would be first openly transgender person to hold a county executive office nationwide.

I can't tell you how many times writers, reporters, commentators, and pundits have invoked the words of Bob Dylan: The times, they are a-changin'. I can, however, virtually guarantee that given its timeless appeal ever since 1964, the iconic cultural anthem will continue to be referenced well into the future. And it can certainly be used right now.

The times in Erie do seem to be a-changin' following the May 2021 primary election, evidenced by the significant victories of progressive Democratic candidates. This includes the (surprise-to-some, affirming-of-the-changin'-to-others) outcome of the marquee Erie County Executive race, which drew added attention because the incumbent county executive, Kathy Dahlkemper, decided not to seek re-election, ensuring that no matter whether a Democrat or Republican emerges in November, Erie County will have a new chief executive.

First, it's important to note that the results of these races are based on the final unofficial vote totals as reported by the Erie County Courthouse. . Precincts throughout the City of Erie have been adjudicated, meaning provisional and mail-in ballots have been counted, as well as write-in votes, but some boroughs and townships are still at work. Until the Erie County Board of Elections certifies the primary results, which must be done by June 17, results remain "unofficial."

Second, with the passing of Act 77 in 2019, Pennsylvanian voters can cast their ballots by mail without needing an approved reason for being absent at their polling place. With an uptick in mail-in ballots to count, election results take longer to report, meaning that it's less likely for races to be called the night of an election without substantial, insurmountable leads established by in-person voting. This was the case for the Erie County Executive race on the Democratic side.

On the Republican side, however, it was easy to call the primary victory for Brenton Davis, who according to results as of May 27, had 10,171 votes over Shawn Wroblewski's 8,367. Davis led out of the gates and only widened the gap throughout the night and into the final unofficial count.

But from the Dems' perspective it was a hold-on-to-your-hat-if-you're-wearing-one kind of night, featuring four lead changes in a race featuring four candidates. But only two were contenders: Dr. Tyler Titus and Carl Anderson, who finished with 8,766 and 8,551 votes, respectively. Behind them, Dylanna Grasinger and Rita Bishop finished with 5,668 and 4,269, respectively.

When results first began to be reported, Titus, a mental health professional, small business owner, Erie School Board President, and 2017 "Erie's 40 Under 40" honoree, took the first lead. Upon the second batch of votes being tallied, Anderson, a self-employed entrepreneur, historical researcher and consultant, and Erie County Council President (representing District 4), took the lead, only to lose it on the third round of reporting, regain it upon the fourth, and lose it again at the fifth. After that, Titus remained atop the vote count and ultimately declared victory the following day.

Anderson saw himself as the frontrunner in the race, saying so during the Erie County Executive Democratic Primary Debate hosted at WQLN Public Media and moderated by Erie News Now's Eva Mastromatteo alongside two Cathedral Prep students. Anderson also out-fundraised all other candidates, amassing a political campaign war chest of more than $137,000 -- $85,000 of which came from just four donors — according to an Erie Times-News report.

Titus, on the other hand, campaigned on grassroots contributions, notching 563 individual campaign donations. Overall, they raised $84,709.

In 2017, Titus was elected to the Erie School Board and made history as the first openly transgender person to be elected in Pennsylvania. Currently, they are the President of the School Board. In the same election, Anderson, who previously sought office as a Republican, won the seat to represent the fourth district of County Council. Today, he's the Council President.

So both Titus and Anderson currently hold another elected office and both hold leadership positions, which they'll both have to give up come January 2022. But one still has the shot of holding the county's highest office.

If Titus wins in November, they would again make history — this time becoming the first openly transgender person to hold a county executive position nationwide.

So, how did we get to the surprise-to-some, affirming-of-the-changin'-to-others outcome in the Democratic Erie County Executive primary race? The answer may be one in the same.

May's primary was a win for Erie County United, a citizen advocacy and social justice group aimed at bringing together "people and organizations to run issue-based campaigns, grow grassroots political power, and build a sustainable progressive movement in Erie," according to its Facebook page. It's a member of the larger Pennsylvania United.

Erie County United put forth a three-person slate for Erie City Council and a four-person slate for Erie School Board. Jasmine Flores, who narrowly lost her 2019 bid for City Council, advanced through the primary for City Council as the second-highest vote-getter (Liz Allen came in first in her bid for a second four-year term), and Elspeth Koehle just missed the cut, falling 25 votes short of earning the fourth spot on the ballot.

Three of the four Erie County United-backed candidates for Erie School Board — Lauren Gillespie, Dr. Leatra Tate, and Zakaria Sharif — are advancing to November. Gillespie and Tate won on the Democratic ticket, while Sharif won on the Republican — in a race where candidates are eligible to cross-party file.

Laythe, a Democrat who's currently serving her first term on Washington Township Council, will represent the Dems in the Erie County Council District 6 race after handedly defeating her primary opponent, Herbert Riede 1,667 to 518. One-term Republican incumbent Scott Rastetter lost his re-election bid to Samuel Bayle IV 1,730 to 1,679, meaning it'll be two new faces facing off for the seat in the fall.

What's worth remembering is that as in-person vote counts are reported throughout the night, results reveal themselves geographically. Ballots are driven to the courthouse — so the farther away from the courthouse, the later they are to report.

When Titus took the lead later in the night, southern Erie was beginning to report. When Laythe's numbers went up, so did Titus'.

While Anderson had support throughout the community — a mailer featuring a list of prominent Erie names supporting him hit mailboxes in the days leading up to the election — the progressives had the support of each other on the ballot. Too, Anderson had photoshopped mailers that created the appearance that he was talking to prospective voters. Titus had a strong door-to-door campaign, and a strong web presence, and the better performance in the Democratic Erie County Executive primary debate.

The primary progressive victories aren't Erie's alone. Of the 25 who took the PA United 2021 Candidate Pledge — to no take corporate cash; to always stand with poor and working-class people, whether black, white, or brown, to make a better future for all of us; to commit to building a multi-racial, multi-generational grassroots movement — all but three advanced from the primary election to the general.

For further proof of the rise of progressive Pennsylvania candidates, one needn't look further than Pittsburgh's Democratic primary.

With a victory in November, he would become Pittsburgh's first Black mayor.

Heading into the fall in Erie, the Democratic party has already thrown its support behind Titus. In a post now making the social media rounds, Chair of the Erie County Democratic Party Jim Wertz wrote:

"I have long known Tyler Titus to be a committed steward of our community and last week Tyler also proved themself to be a skilled campaigner. I congratulate Tyler on crossing the threshold and I look forward to directing the full force of the Erie County Democratic Party behind their candidacy to be our next Erie County Executive."

The times — progressives besting perceived establishment candidates, incumbents losing seats (in races throughout the county covered and also in ones not covered here) — they are a-changin'. But it's worth remembering that just shy of 30 percent of registered voters determined those changes in May.

Will more be decided in the fall? The wheel, as has been said, is still in spin.