Q & A With Frank Turner

Catching up with the folk/punk troubador at the Grog Shop 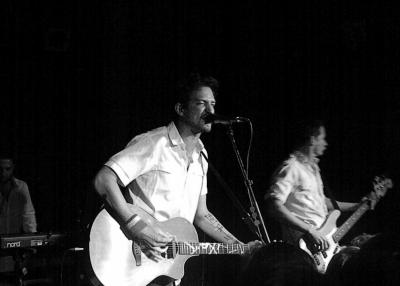 Frank Turner is an internationally-touring folk-punk musician whose "England Keep My Bones" landed on the Erie Reader's Top 10 albums of last year. Recently, he played a killer show at The Grog Shop in Cleveland, where I got a chance to join him on his tour bus and chat about his current tour, differences between England and the U.S., and mixing things up.

Alex Bieler: So, is the tour going well so far?

Frank Turner: Yeah, it's great. This is our second ever full-band-headlined tour in the states. We started off two sold-out shows in Boston to like 1,100 people each, and it took me a long time to achieve that kind of level of anything in the U.K. And obviously we've put the hours in over here, but it's fantastic to come a long way away from home in a different country and people are coming and enjoying them. That's a f---ing privilege, something to be grateful in life.

AB: Yeah, I saw the line coming up, and I was impressed, so good job, sir.

FT: Yeah, we're sold out tonight. Actually, that's a funny cultural thing; people in the states don't buy tickets in advance the same way they do in the U.K.  In the U.K. shows generally sell out way up front if they are going to sell out, whereas in the states I feel like people buy their tickets the week of the show. It always leads to a situation like tonight where I had a bunch of people come in like "oh for f---'s sake, your show's sold out" or "I drove here from Indianapolis." That ticket's been on sale for three months! If this was something in your diary, if this was something you were planning on doing just, you know, work ahead a little bit.

AB: What's the big difference with touring in the states as opposed to back home?

FT: Well, on some levels, I feel like it's worth saying that in the grand scale of things, it's not that different. It's western people going to rock 'n' roll shows. People travel further in this country, and I feel like I'm much more closely associated with the punk-rock scene in this country. I guess the other thing is my career is… actually, I never quite know what the non-asshole phraseology to use here is. My career is kind of further down the line in the U.K. particularly and in Europe than it is here. But it's kind of fun in a way for me, because I feel like if you're Paul McCartney, every single show you're going to play is going to be the same, because it's the same size, and it's always going to sell out, and you're always going to end with "Hey Jude." What's nice for me is that the shows I play in the U.K.,  in Australia, in Europe, and in America are all kind of slightly different, which is good for me because it sort of keeps me on my toes – it means I don't get stale or repetitive.

AB: Well, your sound isn't really just one singular sound. Just on "England Keep My Bones," you'll be thrashing out at one point, but then "Nights Become Days" is really nice and gentle, so it's fun to be able to change things around?

FT: Yeah, definitely. I mean in full awareness that I'm not Stravinsky or anything, it's fun to have a variety of styles to play with. One of the things that's always fun for me is going between solo shows and band shows. The majority of shows I do right now are band shows, and that's how I want it to be, but I'll do solo shows here and there and it's the same catalog of songs I'm picking from, but there's just something about presenting them with one instrument that kind of gives you a different angle.

FT: I hope so. The quality I enjoy most in art generally is honesty. I like that moment in a song or in a book when you feel like something has been said that can't be retracted. So that's what I try to get across, and it seems like it's vaguely working.

FT: Well, the first thing to say about that, and I am being nitpicky, I always feel slightly uncomfortable about the word "fan." It makes me think of Marie Antoinette, you know what I mean? It's "the fans." It just seems like a kind of snobbish word to me. When I'm not playing shows, I'm going to shows. I'm in that queue, you know what I mean? I just don't really want to differentiate myself that hard from the people that come to my shows. I always hang out after shows to hang out with anyone that wants to meet me. It's something that initially I was a little uncomfortable with. I remember the first time I did a tour a people asked me to sign stuff. I initially said "no" on the basis that my name scribbled on a piece of paper isn't worth, or shouldn't be worth, more than anybody else's name. It's sort of egalitarian thing. The problem with that is that it takes a little while to explain that to people and a lot of people's reactions to me saying no to that sort of stuff is "you're an asshole." The other thing is, the way that I look at it, is if it's going to increase the sum total of happiness in the world for me to scribble my name on a piece of paper, than it would be churlish of me not to do that. So yeah, I just try to be open with people.

AB: So you like to being on the same level as everybody else?

FT: Totally. The thing, musically, that I'm interested in, and I'm trying to put this in a non-cheesy way, is trying to break down that barrier between crowd and audience because the most interesting part of any given show is when that barrier falls down and it becomes a communal and collective activity. It's more interesting to me in that situation than when we show up, play our songs, and then we go home. Nothing's gained, nobody's exchanged anything else with anyone, and that's boring to me. What's the f---ing point of driving around the entirety of America in this submarine on wheels and not kind of gaining anything or interacting with people?

FT: That was a lot of fun. The thing about that was that I was way more into that than anyone else. We had this utterly unbelievable bus journey; it was like 30 hours or something. So I was like, "let's make a murder mystery" and everyone was like "yeah!" About five minutes later, everyone was like "no," but I was like "no, we're going to do it!" The actual filming process was a lot of me corralling people. Part four took a bit longer to put together because I didn't actually have a plot when I started – we just kept making it up as we went. Suddenly, we needed to wrap things up. I actually think it wraps up really well; I was really proud of how it came together. It was kind of a lot more work than I expected; I'm not sure if we're going to do another one anytime soon.

FT: Well, the other thing is I think everyone would say "[redacted] you, we're not doing one of those again." But we'll see.