Q & A with the Antlers 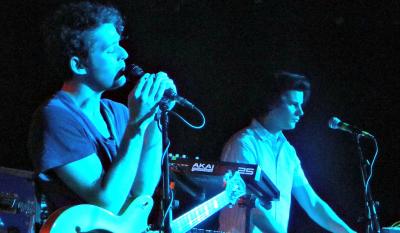 The Antlers burst onto the indie music scene in 2009 after the release of "Hospice," their critically-beloved, breakthrough album. Since then, the band has released more of its trademark atmospheric indie rock, including this year's "Undersea," which we recently gave 4 1/2 stars. We had a chance to sit down with singer/guitarist Peter Silberman before the band played at the Grog Shop in Cleveland.

Alex Bieler: Are you going to take a break soon, or are you going back into the studio to try and record some new music?

Peter Silberman: We'll probably going to take a little break, but we're kinda getting ready to make a new record. I'm not exactly sure how we'll go about that, but we'll probably get started with that pretty soon.

AB: So is "Undersea" going to be part of a new album?

PS: It's kind of its own thing. It was about doing something when we had a little time to record and seeing what we could come up with, see where our heads were at, and check in with ourselves creatively.

PS: It was interesting. We had just gotten back from touring for about a year for "Burst Apart." I think we all wanted to make something relaxing, something calming and meditative, but we didn't know what it going to sound like or be about, so we just recorded and wrote and played music. There was a feeling that at the end of this, we're going to have whatever we have, which is kind of a nice feeling.

AB: I'd say it came out just like you wanted to. I'm guessing the name "Undersea" came later, because it kind of has that feel to it.

PS: Yeah, that came about halfway through the idea of it, once we started what it was sounding like, what we were feeling, and where our heads were at.

AB: Like many people, I first found out about The Antlers with "Hospice." Do you ever find that there are some people that just want you to record another "Hospice?"

PS: Sure. We can definitely feel the "Hospice" diehards, where it's a mixed bag after everything after "Hospice." It's probably just going to be that way, because the reality is that we're not going to make that record again and there'd really be no reason to. We already did it, it already exists. It's not going anywhere. We still play those songs when we play shows. But I think it's hard for people to move on. Sometimes it feels like when you break up with someone and you get kind of pissed off at them for moving on, or they're not miserable anymore like they were when you knew them. We strive to just be honest with everything we do and make things that are genuine with where we're at. I feel like as long as we're never pandering to anything, then I can stand behind what we're doing, but it's always going to be different than the last thing we were doing. It's just the nature of creativity.

AB: How much longer do you see The Antlers going?

PS: I have no idea. We just signed with a new label, so we'll definitely fulfill our obligations, but I just want to keep making records. I don't have any idea of what the future is going to hold. I feel like everything about the band and our lives has changed. I mean, we've been a band for five years and been touring for four years, and I just have no idea where it's going to go next. I think we'll just keep doing this for a while and see what we come up with.

AB: You get some of those people that just want the same thing to come out again, but I want there to be change. Are you the same way?

PS: I prefer bands that have different kinds of records. If they're a career band, a band that's going to be around for a while – and we hope that we are – I really love having those bands where I like their albums, but in totally different ways. You know, you look at one record, and in our case, here's the insanely depressing record, here's the record where it's confused, hopeful, upset, and here's the really Zen record. I like that, I like change.

AB: I've noticed that you're doing a lot more of the bigger music festivals like Bonnaroo, All Tomorrow's Parties, and Pukkelpop. What's that like?

PS: It's definitely different. We started playing these festivals early on in our touring, like back when we first started touring for "Hospice." Maybe Pitchfork Festival was the first one we did, and that was the first where we were like 'festivals are super different than a show.' In a venue, it's really personal, you can see everybody's faces, at least the size of places we're playing. You feel like it's an intimate show. Festivals, a lot of the time they don't feel that intimate and you kind of have to make that intimacy and not go into the other direction and make it combative, which can happen if you're feeling disconnected. It becomes an angry show. It's cool though, because festivals put some things into perspective. It can be a bit of a bubble playing only your own shows, so doing things like supporting other bands and playing festivals gives you a sense of who you are as a band when no one knows who you are. Granted, at these festivals, we have our own contingency there, people that know us, but then there is a big percentage of people that don't at all, so it's interesting to think about what you do with the music that you're used to, music you know really well, falling on totally fresh ears. Some people are not going to be into it and you might make new fans. Festivals are an opportunity.

AB: The vocals are always another instrument, but yours almost takes it to the next level. When you started with "Rolled Together" when I saw you open for The Shins earlier this year, you're voice just captivated the audience, so people that didn't know you then definitely know you now.

PS: Oh yeah, that guy that sings like a girl. [Laughs] Vocals were like a weird thing that I feel were a bit of an accident. I was never a singer growing up; I was always a guitar player. But then when my childhood band broke up, I started making records on my own and I was the one singing then. I just sang based on the singers I listened to at the time, and it was a lot of Elliot Smith, Jeff Buckley, and Radiohead. It was just a natural starting point for me, but it took a lot of work for it to come to a point where felt comfortable and not like I was just trying to imitate those people. Touring really did that, it really broke in my voice and helped me get better control over it. And it's definitely something I have to maintain, and I'm not always the most diligent student. There are a lot things I should not be doing as a singer that I do.

AB: Do you ever go back and play songs from early albums like "In the Attic of the Universe?"

PS: Every once in a while, if I'm feeling kind of nostalgic. It's weird because before "Hospice," I recorded so much. There was "Attic," but there was also "Uprooted" and two EPs or three EPs. Then there was all this stuff before I called it Antlers; it all goes back to when I was 17. It's been a way of cataloging my life and archiving it, but most of that stuff are things I don't want to listen to because I just cringe when I hear it – I just think it's so stupid. It's all a bridge to the next thing, and you can't make music that you like until you make a bunch of music that you grow out of and hate. That's why we continue making different stuff because if you start making the same thing over and over again, it just gets stale.