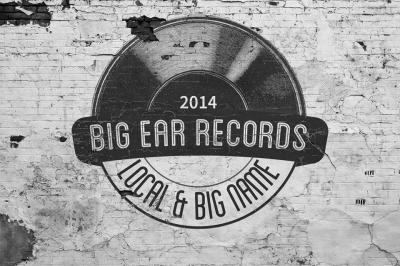 You're probably living under a rock if you haven't noticed that vinyl records are coming back in style.  We at the Erie Reader have already discussed the second coming of our grooved savior, and in the time since then the audience for the revived format has done nothing but grow.

During Gem City Fest, I took the chance to check out Big Ear Records, an independent record store that recently opened inside of Basement Transmissions, and fighting through a fierce crowd, I picked up a  live Woodstock  record and the Star Wars theme on a 45 single, but the selection ranged from Nat King Cole to Cannibal Corpse, and everything in between.

I sat down with the shop's owner, Steven Attenborough, and discussed his intentions and goals for his store, as well as the revival of other dead formats and the glory of the almighty flea market and their benefit to collectors.

Tom Shannon:  So how long have you been gathering records, just as a collector?

Steven Attenborough: Me, personally, I've been collecting since I was about fourteen years old.  I went to the Rock 'n' Roll Hall of Fame in Cleveland, and the FYE that was inside featured vinyl, and I bought my first album, which was a Slipknot record.  So I discovered my love for that format and I sold all my CDs, and that was it.

TS:  That seems to be quite awhile before this recent boom in vinyl, isn't it? Definitely longer than most people who are starting to collect at least.

SA:   Totally.  This was probably in 2008, so it was before vinyl really started booming again.

TS:  Punk and hardcore never really stopped releasing vinyl, but in the last few years is when a lot more genres – and just about everyone – started doing it again.

SA:  Yeah, it never officially died.  I mean, it died in a mainstream sense, but they never actually stopped making it.

TS:  I remember hearing you say at Gem City Fest that you took some of these records out of your own collection.

SA:  Yes, there are some of my personal ones in there, and we're actually getting in new shipments of newer vinyl.  We're getting about twenty records, which should be here in a few days, so we're gonna be expanding.

TS:  Do you buy them directly from the record labels or do you go through some kind of distributor?

SA:  Yeah, distros and websites.  There's a site called importcds.com that always helps out record stores, discounting records and everything.  It just kind of kills you in shipping, that's the only thing, because of the weight.

TS: So with these new records are you trying to order them in bulk or just one of each record?

SA:  One of each, but I try to get a big order, because the more you order, the more lenient they are on pricing.

TS:  When did you decide you wanted to open a record store?

SA:  When word got around that the new Basement Transmissions was gonna happen and I got to see it for myself – how big it was, how many rooms there were, how many possibilities it had – I'm a musician personally, but other than playing in a band, this was always my dream, just to start a little record shop and sell music to people.  But once this all started happening, I talked to Bobby J and he got me a sweet deal and probably the perfect room to do this in, it's right as soon as you walk in.  This all is the result of planning for about three months.  In that time span this has all come together.

TS:  Do you plan on expanding into a bigger room or your own building eventually?

SA:  Yeah, if this becomes successful enough for us, we do want to eventually move to an actual space.  You know, get an apartment upstairs – if you're familiar with Graham's Records, that's his set up too.  He lives upstairs and goes downstairs for the record shop.  So that would be pretty sweet to do that someday.  It all depends if we have success here.

TS:  So right now since you're located inside of BT, are you only open during shows, or do you have scheduled hours for the shop?

SA:  Right now we're only open during shows.  We both (Attenborough and his fiancé)have full-time jobs that we have to commit to otherwise, and this is really a part-time thing for now.  Like I said, it all depends on our success and support we get here, so it could one day very well turn into our actual jobs.  That would be amazing.

TS:  I've been to Graham's records, and they definitely have a wide selection, but as far as my musical tastes, they only had a few records I really wanted.  But here already, you have way more records I'd be interested in, while still maintaining a lot of diversity. I feel like the type of people that go to BT will definitely appreciate that.

SA:  Right.  I really want to appeal to kids who are starting to get into [collecting].  There's The Exchange; I used to work there, they have a lot of new stuff too.  I'm really trying to pick out what's going to appeal to kids to get them starting, you know what I mean?  For me at least, when I started, there wasn't any way for me to stop.  It's really an addiction, buying records.  In the meantime, while they're picking up new stuff, they can discover the old stuff that they might not be familiar with.  They could pick up an Asking Alexandria record, and discover Pink Floyd at the same time.

TS:  How many of your records have you gotten through donations?  I remember seeing a post on the Erie Vinyl Facebook page asking for donations of records people didn't want anymore.

SA:  I'd say there are maybe only twenty or thirty records that have actually been donated to us.  There was a gentleman that sold us – I wanna say, maybe – 300 or 400 records for a very, very reasonable price.  That's what most of the records in our dollar rack are.  A lot of the other records come from buying from yard sales, flea markets, discovering things that people don't quite know what they're selling, you know?

TS:  Yeah, I definitely never thought I'd find something like that at a flea market.  Especially not from a little old lady [laughs].  I see you have a small selection of cassettes here too.

TS:  Cassettes seem to be making a comeback too.

SA:  They are.  I'm actually kind of shocked, because at Gem City Fest, I sold ten of them, and I couldn't believe that.  I was surprised that I sold any at all, but people were actually quite interested in them.  I'm well aware of all the newer punk bands that are pressing brand new cassettes, and a lot of new metal too.  They're still very cheap to make.

TS:  And I see you have bunch of local music on the counter too.

SA:  Yeah, we're all about supporting locals.  A lot of these local CDs were donated to me, but I'm talking to Spud Dog, Cop Torture (now called Bad Faith) – you know, all the local punk bands and stuff.  They provide [their music] to me, I sell it for them, and give the money straight to them.  I don't keep anything from them.  It's more or less just trying to help the locals.

TS:  That's definitely an important way to support the scene.

SA:  Totally.  As much as I'd like to do it for my own personal gain, that sounds selfish as hell, but it's always been my dream to do this, just wanting to be involved in the local scene in general, whether it's being in a band or selling records or helping the venue.  We help Bobby J sell his T-shirts here, we help him sell tickets for upcoming shows and local bands.

TS:  I definitely like the spot you have back here.  It's different than most venues where this would be more of a 'staff only' kind of room.  But here you can come back to hangout and check out some records.

TS:  And there's going to be a recording studio in the basement eventually too, right?

SA: Yep.  And there's also a movie theater in here.

TS: I remember seeing an event on Facebook for a double feature of Blazing Saddles and Young Frankenstein.

SA:  He did a double feature of the Alien movies as well.  It was really cool to see those on the big screen again.

TS:  So really Basement Transmissions is doing great things for – well, not just the music scene, but the community in general.

SA:  Yeah, that's what it's all about – especially with Bobby J; he's all about community.