Stories you may have missed from the Erie Reader Archive. This week: Jason Lavery 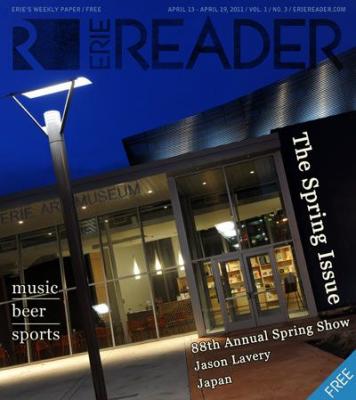 At the risk of adding votes to his total in the Best of Erie's "Most overexposed local celebrity" category, we're going to revisit Jason Lavery in this installment of the Reader Vault.

Back in the early days of the Erie Reader, Lavery wasn't an overexposed local celebrity - he was just a guy with an idea - an idea that the people of wanted better beer, and more of it.

Turns out, he was right.

Reader writer Cory Vaillancourt profiled Lavery in the April 20, 2011 issue, which was the Reader's third; Lavery was still brewing out of Brewerie and hadn't even begun moving his own tanks in to the now-thriving space at . And the pub itself was still a just dream - a big "if."

That "if" turned into an "it" just over a year ago, and a few months after that, Lavery and crew took home a Gold Medal from the 2013 Great American Beer Fest in .

But before all that there was just this guy, with an idea, and the skills, motivation and support to germinate that idea that now brings so much beauty into so many lives. So if you haven't already done so, get the lowdown on Jason here.