It only took once for Lavery Brewing Company to enter the Great American Beer Fest and win... Gold. 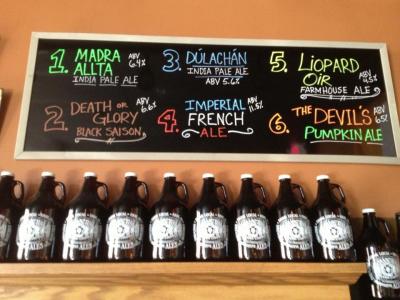 In case you haven't noticed, we at the Erie Reader like Lavery's. A lot.

We featured Jason Lavery in the third installment of our YOTK series. We talked about the swell of excitement in the city when he and his crew opened a brewery. Then we talked to him and his crew again about his brewery when we did a regional beer tour. Then Jason made our first-ever 40-Under-40 list. And just recently, our Reader Eater reviewed the brewing company's new pub.

All of that led to two different op-eds from our editorial board – one where we said: "Erie's future is, now more than ever, in the hands of its people. And Erie's future is, as one business branches out and another continues thriving, in craft beer;" and the other, where we said: "We like featuring success stories, because these serve as examples of the greatness Erieites are capable of. And according to you, our Reader readers, you like reading these stories."

And we're not just bloviating. As it turns out, the proof's in the, umm, hops.

On October 12, I received a phone call from what sounded like an out-of-breath-from-just-hearing-the-greatest-news-ever Bryan Toy. Have I got a story for you! barked the craft beer enthusiast, almost giddy, into the phone. Have you heard yet?!

What I hadn't yet heard and what he was about to tell me was that Lavery Brewing Company had just won a Gold Medal at the 2013 Great American Beer Fest in Denver, Colo., for their Golden Leopard -- more formally known as the Liopard Oir Farmhouse Saison -- in the French and Belgian-Style Saison category.

Yep. As in First Place. As in a gen-u-ine Gold Medal [Editor's note: we're not sure if they get an actual medal, or if said medal is actually made of gold, but, hey, it's pretty cool that they won 'gold' for a beer with 'gold' in the name].

But truthfully: As in the best. Period. As in better than the other 118 entries. As in the best damn saison you can find in the country for the next year.

What's more, Lavery's was featured in an article on Huffington Post about the festival. And what's even more than that, the article highlights the most-entered categories, with the one Lavery's won coming in sixth out of eighty-four total.

Now if that's not an emblem of Erie's bright future, I don't know what is.

Ben Speggen enjoys the Golden Leopard, but thinks Dulachan is the best beer brewed in Erie, period, and hopes it wins an award soon, as to validate his particular palate. He can be contacted at bSpeggen@ErieReader.com, and you can follow him on Twitter @ERBenSpeggen.