Tyler Smilo and company are ready to offer up one of the best local albums in recent memory.

by Nick Warren
View ProfileTwitterInstagramRSS Feed
April 25, 2018 at 10:00 AM 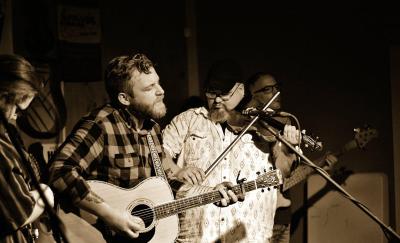 To celebrate their debut full-length record, the aptly-titled Ghost Writers, Tyler Smilo and company are ready to offer up one of the best local albums in recent memory. The folk quintet has an authentic, rootsy sound that fluently translates to modern audiences. Recorded at Sonic Farms in Colden, New York, and mixed and mastered by Jason Rose at GCR Studios in Buffalo, the album sounds crisp, clear, and sullenly beautiful. Creating an expansive indie folk sound, the five-piece is comprised of some of the most talented musicians in the area.

"Originally, we wanted to do like a chamber orchestra over my poppy folk songs," Smilo said, telling of the concept that began the group.

After teaming up with bassist Jassen Wilber, Smilo found his orchestra, with Wilber writing string parts for the singer's work. After meeting at open mic nights, Wilber showed up knowing Smilo's songs, and offering his own arrangements. "He is so much a secondary mind in that project," remarked Smilo of Wilber's importance.

They also brought along the great Eric Brewer, playing banjo, lap steel and acoustic guitar. Adam McKillip's mandolin is further enhanced by his remarkable backup vocals. Violist Abby Barret and violinist Ted Smeltz bring together the band's sound, their emotive strings adding to the band's rich atmosphere. All packaged together in a gorgeous layout by Eddie Arranda, the 11 tracks rise and fall in an experience that's worth hearing both live and on record.

Styled after a Prohibition-era speakeasy, Room 33 will play host to the album's official release party. World-renowned bassist Tony Grey will start the night off. — Nick Warren