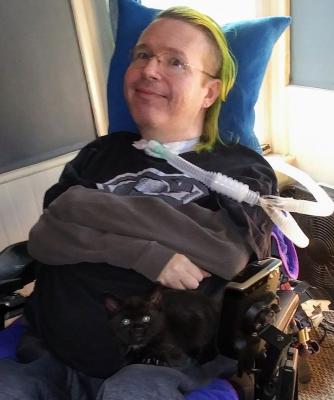 There is now a huge void left in the Erie music scene, one left by a man who was so motivated and selfless that there wasn't a person who didn't respect the work that he was doing. Alex Harrilla, booking agent and promoter for Gimp Guy Underground passed away on November 4th after a lifelong battle with Muscular Dystrophy. In a music scene where there can be in-fighting and backstabbing, Alex managed to make friends with every scenester and musician who had the pleasure of playing or attending one of his shows. He took his passion for music to a level where he was as synonymous with the bands and venues he associated with, as the musicians themselves.

Alex Harrilla was from Allison Park in Pittsburgh, PA, and moved to the region when he enrolled in Edinboro University. Alex decided to stay in the Erie area after graduation, where he eventually became a key figure in supporting local music. Iggy Imig (Close Friend) first met Alex in 1994 while working as an aide for disabled students at Edinboro University. At that time Iggy was the singer for the hardcore band Abnegation, when Alex, along with his friend Tom Hicks, set up a show on the Edinboro campus. Iggy believes this was where the seed was planted in Alex to become a promoter. Iggy recalled that "The first show had everything you could ask for: Car surfing, punks, political debates/screaming matches, and the police eventually came and shut the show down." Iggy went on to say that Alex's love of music was so intense that they had a morning routine that consisted of listening to everything from hardcore bands like Integrity to more commercial rock like Radiohead. Alex, along with his friend Tom, would also go to every show possible in a two-hour radius, no matter who was playing.

Around the age of 27, Alex had a long stay in the hospital, this was when he was placed on a ventilator. Iggy believes this was a defining moment for Alex. Iggy said "when he got out of the hospital, he had a renewed passion for life and music. It was shortly after this that he started booking shows regularly via Gimp Guy Underground."

JC Nickles (close friend and musician) said "just this year alone, anytime I accompanied Alex to a show there'd be an experienced musician that would state that Alex Harrilla is the staple of this town (Erie)." NIckles also spoke about Alex's drive and passion, "With the ups and downs in business and the music scene many give up or move on because they're in it for the wrong reasons, however, Alex of Gimp Guy Underground kept things alive because he loved life."

Kristen Nielsen (close friend and musician) said that "not only did he whole-heartedly support the music scene, in fact, he is responsible for many musicians in the region for pushing their creative outlets. He also helped small venue owners that were, at times, struggling to keep their doors open. She also added, "Alex was my best friend. He literally saved my life. He is also single-handedly responsible for my career in the local music scene". These sentiments were echoed on social media throughout the day as word began to spread of his passing. It was hard to scroll without seeing a loving tribute to Alex and the personal stories on how he touched those in the scene. It was an outpouring of love that is usually reserved for rock stars, artists, and other celebrities that people have a close connection to, but will never meet.

Bob Jensen (Owner and Operator of Basement Transmissions) said " Alex's service to the community has often gone under the radar. For all the venues and promoters this city has seen, Alex has been a consistency." Jensen went on to say "The thing that made Alex so unique is his deeper understanding of the value of a show to us all, as individuals, and he was willing to make it happen for us even if the cost came out of his own pocket". The thing that every musician and venue owner will tell you is that it's hard getting people to show up. Alex had a love for music that went beyond the "bottom line", for him the bottom line was that these artists needed to play, not just for themselves or for fans of independent music, but for the scene to continue to grow. Kristen said "When Alex started putting together shows with local no-name bands and helping those touring through the area, there wasn't really a scene here. Gimp Guy Underground was born out of Alex wanting to go to shows and give bands a chance."

Alex Harrilla was 46  years old when he passed away, he carved out a scene where we could all feel welcome and support each other in our craft. To quote Iggy Imig "Alex could barely move his fingertip, yet still did all of his own flyer and promotional work." That dedication, with his passion is not only something that we should remember him for, but something that should motivate us in our daily lives.

Larry Wheaton can be reached at wheaton1138@gmail.com.