Despite a snowstorm, the turnout for Representative Mike Kelly's first town meeting address at Blasco Library was admirable. 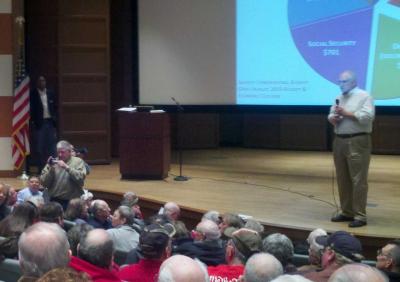 Pennsylvania's 3rd Congressional District Representative Mike Kelly held his first town hall meeting Saturday, Feb. 12 in the H.O. Hirt Auditorium of the Blasco Library. Roughly 150 people filed into the auditorium despite the raging snowstorm outside. At the request of a community member, the meeting began with reciting the pledge of allegiance. Kelly then asked a priest in attendance to lead us in prayer.

Rep. Kelly arrived promptly at 10 a.m., made his way to the stage, and preceded to comment about the weather, a defining trait of the Erie region. Kelly opened the presentation by professing his desire to listen—that the format for this meeting is meant for him to listen to the concerns of the people. And the people definitely intended to be heard.

Rep. Kelly started the presentation by outlining specific methods of contacting his district office. The first slide in his presentation exhibits the locations and phone numbers of his offices in Erie, Greenville and Butler. He also made a point to introduce his staff, whom is better suited to provide immediate assistance regarding issues he may not be able to address directly.

Rep. Kelly, before delving into the imminent problems the accrued debt poses on our country, asked all in attendance to think about their loved ones, the pictures in their wallets of their "children and grandchildren," because they are who will be left with the responsibility for the "tsunami" of debt we have accumulated. He continued, stating that for the first time in our country's history, "there is an overwhelming feeling" that members of our children's generation will not have a better future than their parents did.

Rep. Kelly was a car salesman before becoming a politician. He related many of our overarching economic problems and problems among businesses to his own experience as a small business owner. For example, he addressed the country's recent overpayment to the United Nations and failure to obtain the mistaken 179 million dollars. He related this to his own business, stating that if he were involved in a scenario where someone overpaid him, he would send him or her a check for the difference to correct the problem, insinuating responsible business behavior.

Kelly's focus on this failure echoed one of his central beliefs: when you're broke, you're broke—a statement Kelly often returned to as an answer to questions those in attendance posed. A member of the American Cancer Society pleaded that flat-line funding will set back the research necessary to obtain a cure for cancer. Kelly, who watched two of his immediate family members die from cancer, said he believes that the state of our debt calls for cut backs, not excluding cancer research. He made it very clear that he does not intend to eliminate funding for programs like the American Cancer Society and Women Infants and Children (WIC), but he believes we are in no position to increase funding because, again, when you're broke, you're broke.

Father Jerry Priscaro of St. Anne's Catholic Church is concerned with this approach to cut backs for programs that aide people in need, "Money is still being spent… don't tell us there is no money available." Father Priscaro felt that Rep. Mike Kelly answered some of the people's questions in a "non-committal" manner and would have liked to hear more distinct, proactive pledges of action.

Gabrielle Sergi, 11, attends St. Lukes School in Erie and this was her first town meeting she ever attended. She thought it was "interesting" listening to all the proposed changes that can be made. When talking about her classmates, Gabrielle observed a startling reality: "Not many people in [her] class care about things like this."

Gabrielle's father, Michael Sergi, brought both of his young daughters to the town meeting today. He feels that, "it's important for them to be here." Michael intended to make a statement, but was passed over and eventually did not get the chance to state what was on his mind. He wanted to remind those in attendance that "the founding fathers" when writing the constitution, "set forth that the role of government was to protect our country." Rep. Kelly's pie chart depicts both representations of defensive spending as "discretionary." Sergi believes that defense should be the "mandatory spending" and the other categories are "entitlements."

Rep. Mike Kelly's district director and member of his staff Brad Moore was pleased with the turnout. "It was our first one so we really didn't know quite what to expect. We had a large diversity of questions, nothing really that we didn't expect."

Rep. Kelly himself was, overall, pleased with the turnout, "Will you look at the weather outside… of course this is Erie, this is early spring for us… I think it shows just how interested people are in their government and in the future, what's going to happen to their children and grandchildren." Kelly pleaded to not be "diplomatic" when voicing concerns to him, and he faced some truly non-diplomatic questions yesterday, "Some of the ones, I may have told them what they don't like but you know what that's what we're here for. I want to listen to them. I want to hear what they have to say. It was a great dialogue."

Rep. Kelly's main message to the public is that "things are going to be dialed back, they're not going to be cut… we have to cut back." Regarding the extension of the Patriot Act, Kelly maintains "the Patriot Act has helped to keep us safe," and Kelly believes firmly in protecting the people of the United States.

Rep. Kelly wants, above all, to remain accessible through his term in office. He wants people to voice their concerns and stay involved so he can adequately represent those concerns in Washington.

Rep. Kelly had a second town meeting Saturday evening, Feb. 12, in Butler and one in Greenville in early March.