Singer-songwriter circles back to the place, people that made him

by Nick Warren
View ProfileTwitterInstagramRSS Feed
December 19, 2018 at 11:15 AM 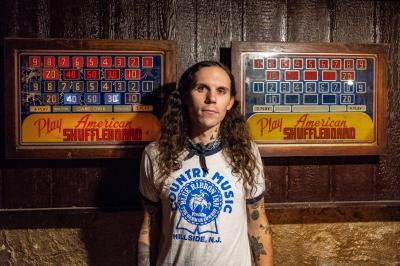 This season is a time for family. That can mean different things for different people and it all hinges on what your definition of "family" is. Growing up in Girard and around the Erie music community as a whole, Roger Harvey still considers many local musicians to be "his people." At a remarkably young age, he became part of the scene (in the early days known as "Little Roger"), and soon joined up with The Code, who were on A-F Records at the time. He started to explore songwriting on his own more, and began a solo acoustic project, Dandelion Snow. Later, he moved to Pittsburgh and teamed up with Chris #2 of Anti Flag to co-front the band White Wives. Harvey moved around again, first to New York City, then to Portland, Ore. He settled in Philadelphia, the place he now calls home when he's not on the road. These days he's been making a name for himself as a solo artist. In 2017, he put out his second full-length, titled Two Coyotes on Chunksaah Records, a label ran by The Bouncing Souls, a band whom he's toured with extensively. He's also shared runs with the Menzingers, Tim Barry, and Against Me! His latest recordings have showcased a full, folk/alt-country sound, and features musicians like Brett Resnick (the pedal steel player for Kacey Musgraves and Kelsey Waldon) and drummer Mike Sneeringer (of The Loved Ones and Strand of Oaks), known as Roger Harvey & Family. Building on that concept, he has "been doing these things called 'family shows,'" Harvey notes. He recently played on at The First Unitarian Church of Philadelphia (with guests like PJ Bond, Anika Pyle, Mimi Gallagher, and Jeff Riddle.) "They're really low pressure if people are into the concept because everyone just plays a few songs. I'll usually play more at the end." Brainstorming with some friends from home, he started to wonder if he could do it in Erie. He quickly got This American Song's Jeff Phillips on board. "I always really looked up to Jeff. The first band I ever went on the road with — just out of town for a couple of shows was with Black Rose Diary." He also enlisted Fred Oakman, the talented songwriter who fronts One If By Land, and his band, The Flood. There were a few friends who haven't performed in years in play as well, special guests to be determined, as reluctant returns to the stage often go. "Me and Steve Maynard are going to DJ country records afterwards. I think it could be a cool night for everyone," Harvey smiled. — Nick Warren